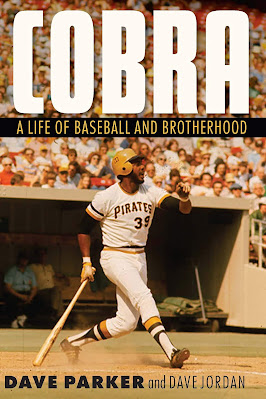 Cobra: A Life of Baseball and Brotherhood

By Dave Parker and Dave Jordan

Dave Parker is one of the moot memorable players of the colorful era of baseball (literally marked by bright-colored uniforms, especially on his Pittsbugh Pirates) in the late 1970s and into the '80s. Standing at six-foot-five and weighing 235 pounds, the slugger known as Cobra was a World Series champion with both the Pirates, in 1979. and a decade later, with the Oakland Athletics, in 1989; a seven-time All-Star, a two-time batting champion, the 1978 National League Most Valuable Player, and a frequent Gold Glove winner.

In this compelling book, Parker delivers his wild and long-awaited autobiography, an authoritative account of Black baseball at its heyday as seen through his the Cobra's eyes.

It is the story of a Black athlete making his way through the sport during the time of major social and cultural transformation. He takes us on his journey from his earliest days in Major League Baseball with the Pirates, learning the game from such baseball legends as Pie Traynor and Roberto Clemente, to his later years as a respected veteran with the Cincinnati Reds mentoring younger talents like Eric Davis and Barry Larkin.

From the racially integrated playing fields of his high school days to the cookie-cutter cathedrals of his prime, alongside all the theatrics that accompany an athlete's life on the road, Parker offers readers a glimpse of all that and everything in between.

Parker's teammate and roommate Ron "Satch Mitchell said of him, "What do I remember about Dave? Besides his confidence, his predictions, his incredible talent? When we roomed together, he kept a photo of his baby daughter on the nightstand. Didn't matter how tired we were, how late the night went, before we turned the lights off, he always picked up that photo, looked at it for a few seconds, kissed it, then smiled. I never forgot that."

In this excerpt, Parker writes of what it was like arriving to Pirates camp when he knew he was on the brink of making the big leagues: "I rolled up behind the road to Pirate City with a different mindset in February 1971. I finished off the previous year as one of the top players in Gulf Coast rookie ball, turned heads at the instructional league, even filmed a local car commercial with a Pirates pitcher, Dave Giusti It was the baseball version of feeling fine on cloud nine. I didn't bring my trusty catcher's mitt this time but rather the confidence that I could hand with all these fellas. Sounds funny to say, but I expected all this spiritual pageantry upon entering the building.

And then I actually entered the building.

Now, of course, I knew that the NL division-winning players would be there, but I was nineteen at the time and had spent the last few months celebrating my first playing session in the organization. All the established fellas were surrounded by writers and beat reporters. The prospects were in their own little groups inside the cafeteria. Sadowski was there with the other young players. Omar Moreno came in and greeted the Minor League Latin players. Ed Ott joked around with a few other rookies. Then I saw the boys on the big club. Our secnod-year second baseman Dave Cash was chatting with our second-year outfielder Gene Clines. I walked by Giusti, who greeted me with a gentle slap on the back as he was chatting with Steve Blass, one of our top starters. The legendary second baseman Bill Mazeroski was laughing it up with Nellie Briles, a starting pitcher we had just acquired from St. Louis. Richie Hebner was chatting with Bob Robertson, the power-hitting first baseman people were predicting could challenge Ralph Kiner's team home run records. One pitcher, Bob Johnson, came in the trade for a reliever named Bruce Dal Canton, a backup catcher, and an expendable shortstop named Freddie Patek. Johnson seemed to be talking the ear off another pitcher pitcher, Like Walker, the team's top winner, trying to learn everything he could about the National League hitters. People don't remember, but Bob Johnson led the American League in strikeouts the year before with 206. The trade was a big deal, because by sending Patek away, the Pirates assured the veteran Gene Alley that he'd be the starting shortstop. Getting a strikeout king for an extra shortstop looked like a steal to me at the time. I quickly made my way upstairs to the dorm rooms and dropped off my stuff. I noticed some papers on the other bed. They belonged to Rob Mitchell. The Pirates took care of the small details. I was rooming with Satch.

Once I got into uniform, it was time to head out to the warning track on field 1 for sprinting. They grouped me with the outfielders, including Omar. Once again, I dominated the field - except for Moreno. Fastest man in camp. Had to hand it to him. Later in the afternoon, I was walking toward the field 1 dugout, when a presence approached me.

'Hey Parker, you're as fast as they say.' The player reached out his arm. 'I'm Will.' I couldn't believe that Stargell, one of the prime stars of the ball club, was taking the time to introduce himself to me. I shook his hand and expressed my appreciation for his work. Kind of gushed, to be honest, and that wasn't like me. But Will wasn't any old player.

'We're a close group. You ever need anything just ask.' I thanked him, and he patted me on the back and jogged away."