Books: "Is This Heaven?" On The Magical Field Of Dreams 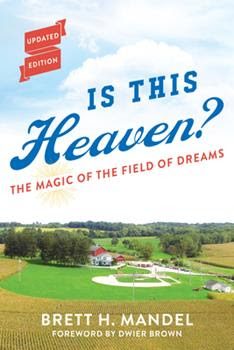 Is This Heaven? The Magic of the Field of Dreams

When "Field of Dreams" was released in 1989, it instantly became a baseball movie classic, but it's about so much more.

"If you build it, he will come" became part of the vernacular quickly, as Ray Kinsella, played by Kevin Costner, realized it was a plea from his late father to build a baseball field and bring back his beloved "Shoeless" Joe Jackson and the 1918 Chicago White Sox, who were blacklisted for throwing the World Series.

As the story progresses, he visits reclusive author Terence Mann, played by James Earl Jones in one of his most memorable roles, in Boston; and Moonlight Graham, who was played by Burt Lancaster in some very touching scenes. You could go on all day about how many memorable scenes are in this landmark film.

Where the movie all came together was at the end when Ray fights to save the field from his brother-in-law who wants him to sell the farm, and is backed up by those who want him to save it, like the old White Sox players and Mann, who delivered one of the most memorable movie speeches ever, proclaiming that "people will come, Ray!"

Then, the movie builds to Ray seeing who was collecting his catching equipment together at the end of the day, and it was his father. That scene put the movie on another level, where you can't avoid having a tear in your eye even after seeing it a hundred times.

In the landmark book Is This Heaven?, which was re-released last year when Major League Baseball announced they would be holding a game at the field in Dyersville, Iowa, Brett Mandel tells us the history of this mystical baseball field and why it attracts thousands of visitors a year. It is the story of a mythical place made real, its incredible lure, and its effect on people who have stepped between its chalk lines.

The title of this book, which would fit perfectly with all your baseball books, comes from another line that has stood the test of time. "Is this heaven?" is what Shoeless Joe asks Ray after he arrives at the field, and Ray replied, "It's Iowa!" Perhaps that's where the magic comes from.

In this excerpt, Mandel writes about the allure of this place that is more than just a baseball field: "Make-believe places are able to establish a tug at people's hearts and minds - some kitschy, some spiritual, but all quite real despite the contrived nature of the actual sites. The acreage that served as the setting for Kevin Costner's and Ray Liotta's quest for redemption and fulfillment through the mystical elements of America's national pastime has become a destination for people searching for something. People from across the globe have found their way to this diamond to race around the bases, shag fly balls, knock one out of the park, and connect with something missing in their lives.

The people of Dyersville cannot say they weren't warned. Field of Dreams foretold the pilgrimage that began just weeks after the film debuted and has continued to today.

'People will come,' predicted the character Terence Mann in Field of Dreams. More than ten years after Hollywood transformed the fields of two Dyersville farmers into a baseball diamond, people have turned off a narrow country road, down one of a pair of short gravel drives, and onto the farms of Don Lansing and Al and Rita Ameskamp - more than fifty thousand visitors each year, perhaps as many as one million visitors to date, and counting.

Field of Dreams may center around fictional farmer Ray Kinsella's ability to conjure a connection with his late father - and "Shoeless" Joe Jackson - out of the Iowa corn, but the tangible remains of the story's magic have come to mean much more to its visitors. People have come to Dyersville and the Field of Dreams for a variety of reasons and have walked away with an astounding array of moving experiences. Fathers and sons have cemented tattered relationships with a game of catch on the magical field. Families have found relief from stress and a sanctuary away from their hectic everyday lives just wandering along the foul lines...

The term redemption never appears in a baseball box score, and the word reconciliation is usually left out of most sportscasters' descriptions of last night's ball game. While a sacrifice can be an integral part of a big inning, baseball does not often have much to so with a shrine, a pilgrimage, or heaven. But at the Field of Dreams, redemption and reconciliation are noted more carefully than strikes or balls, and talk of a shrine, a pilgrimage, and even heaven drowns out talk of runs, hits, or errors. In a small town at the heart of America, on a baseball field carved into a cornfield, these words describe the experiences of visitors who search for something they need in their lives and find peace in an extraordinary location.

When the Dyersville farms of Don Lansing and Al and Rita Ameskamp were turned into a movie set for the filming of Field of Dreams, there was not way to tell that it would bring more than Kevin Costner and James Earl Jones to town. But the film's story about ghosts and dreams - too fanciful for many reviewers to take seriously - resonated with those who suspended their disbelief. Looking to discover whether second chances could actually be found in the Dyersville corn and whether heaven is indeed nestled on an Iowa farm, a trickle of visitors began to journey to the former movie set in 1989. Buoyed by remarkable stories recounted by those who made the trip, the Field of Dreams grew from a temporary Hollywood back lot to a destination for tens of thousands of visitors each year. It is not unusual for thousands of people to visit the field on a peak weekend.

The field's tenders have become unlikely soothsayers for their tribe of visitors, working an enchantment as benevolent hosts. In an attempt to capture its magic, the Carolina Mudcats of the Double A Southern League flew Don Lansing to Zebulon, North Carolina, where he sprinkled a bucket full of dirt from the Field of Dreams onto the infield of new Five County Stadium to inaugurate the park in 1991. The Mudcats had a lackluster run from 1966 to 1976, but Lansing's dirt may have been magical for some 1991 Mudcats players - pitcher Tim Wakefield and first baseman Kevin Young carried a little Field of Dreams dirt on their spikes all the way to the majors."