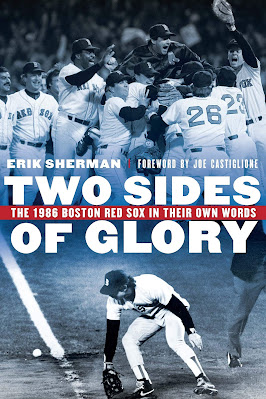 Two Sides of Glory: The 1986 Boston Red Sox in Their Own Words

The 1986 Major League Baseball postseason is one of the most memorable ever, with the Mets beating the Houston Astros for the National League pennant, and the Boston Red Sox coming away from the brink of defeat to beat the California Angels in seven games.

It all set up a vintage World Series that has been dissected perhaps more than any other. It was a series filled with drama, with the most infamous moment from the Boston perspective being Mookie Wilson's dribbler going down the first base line and through the legs of first baseman Bill Buckner.

"In comes Knight and the Mets win it!" was how Vin Scully described it on NBC, as Ray Knight came in from second base to score the winning run for the Mets and force a Game 7.

In that seventh game, Boston jumped out to an early lead, and once again, the Mets came all the way back to win their second championship and extend Boston's "Curse of the Bambino."

While the Mets' perspective has been heavily discussed, the perspective of the Sox has been less explored, for numerous reasons. Erik Sherman hopes to balance that ledger with this deeply researched book, Two Sides of Glory, which is meant as a companion to his book on the Amazin's, Kings of Queens: Life beyond Baseball with the '86 Mets, and Mookie: Life, Baseball, and the '86 Mets.

Sherman writes of his goals with this book, "With the benefit of years of reflection and perspective from the men who made up the '86 Red Sox, my goal, through deep and sometimes emotional interviews, was to write the definitive book on this iconic yet Shakespearean drama-like team. to my great satisfaction, at nearly every turn there was the thrill of discovering history never told.

"Make no mistake: in spite of their World Series misery, the '86 Red Sox were a beloved, magical team. All these years later they are instantly recalled by nicknames like 'Oil Can,' 'Rocket,' 'Spike,' 'Buck,' and 'Dewey.' They were  - and have remained baseball royalty in 'The Hub.'...

"Now, four World Series championships later, the time had at long last arrived. The opportunity had arisen to give this historic team its due. It was also time to dispel some of the myths, inaccuracies, and misnomers that have been written and spoken about the team as truth."

In Two Sides of Glory, Sherman has recollections from players that are both insightful and surprisingly emotional. Bill Buckner, who passed away suddenly in May 2019, speaks openly about the aftermath of the series, in which a lot of people solely blamed him for the defeat. Pitcher Bruce Hurst broke down numerous times during his interview, while outfielder Dwight Evans confesses that he never spoke at length about the 1986 team.

Pitcher Roger Clemens, the ace of the staff who went on to win two World Series with the Yankees in the late 1990s, talks candidly about the 1986 Red Sox and the steroid accusations that have dogged him and kept him out of the Hall of Fame.

Clemens also addresses Red Sox Manager John McNamara's decision to pull him in the sixth game of the World Series. Sherman writes of Clemens' feelings heading into the final game of the Series and how the team is presently viewed in this excerpt: "Despite his disappointment in not finishing off the Mets in Game Six, Clemens is convincing in his conviction that the Red Sox had a strong chance of winning the next game: "After it all fell apart, I was fired up because [before the rainout] we had a fresh Oil Can Boyd ready to go. But then we got that rainout, so now we also had a very fresh Bruce Hurst, who had been pitching incredibly well during the World Series. We had to chew on it a little bit more to decide who would pitch, and McNamara named Hurst tyhe starter. I know Oil Can was a little upset and hot under the collar - and rightfully so because he wanted the ball - but Hursty had pitched some outstanding games.'

Hurst would pitch very well early - five shutout innings before facing trouble in the next frame - and left after six innings in a 3-3 tie. But another one of the great mysteries of this World Series was why Clemens, the Red Sox's best option, wasn't used in relief.

'I went out there to the bullpen ready to pitch for an inning or two,' Clemens exclaims. 'I'm sitting out there, watching arm after arm come out of the bullpen before me. I was hoping I was going to get a chance to get in even if they just needed an out or an inning. I was out there stretching and just waiting for the phone to ring. I don't know if they were protecting me or were worried about next year because I was so young. But right then, that's when the floodgates opened."

McNamara would use five pitchers - including Game Four losing starter Al Nipper - in the seventh and eighth innings in an effort that would yield five runs to the Mets in their 8-5 victory. It left Red Sox fans wondering what could have been had Clemens (or even Boyd) been brought into the game. I bring this up to Roger, though he just pauses in reflection and takes the high road in his response.

'It was a tremendous season. I mean it was off-the-charts special. And now that time has passed, I think it's really cool that you hear from some of the Red Sox players, the media, the coaches, and everybody on the inside [of the orgranization] saying that the '86 team got Boston back on the map. It got them back to their winning ways and desire to win. So that's a huge compliment to everybody on our team. When the Red Sox finally won it all in 2004, I was with the Astros, and I told people I was smiling the most after it happened  because I wasn't just happy for those guys and our fans there in New England, but I was also thinking how a little piece of that ring belongs to Jim Rice and Dwight Evans and Bruce Hurst and Marty Barrett and Wade Boggs and Richie Gedman and so on and so forth. I'm hoping all those guys had a nice smile on their faces too because we were a part of that stepping stone in building a championship. I know the Yawkeys were gone, and they had new owners and everything - and what they've done is incredible - but there were definitely some stepping stones left from the '86 championship season.'

'It seems like the '86 team gets honored and celebrated more than ever,' I observe. 'Do you get that sense too?'

'Yeah, absolutely!' Clemens exclaims. 'There is just so much excitement about it. It's kind of like what you're doing with me today - reliving it and realizing how special a year it was. It's not something to look down on or feel bad about. It was a fantastic year! Unbelievably exciting! We went from one series and kind of ripped the hearts out of [the Angels] and then had it done to ourselves a week later. Of my six World Series '86 was, along with 2001, one of the most emotional ones.'"