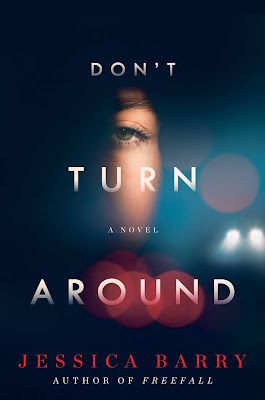 Jessica Barry is a pseudonym for an American author who grew up in a small town in Massachusetts and was raised on a steady diet of library books and PBS. She is the author of Freefall, which was a thriller focused on a woman who survived a plane crash only to be hunted by somebody who wants her dead, and has been optioned for a feature film.

Don't Turn Around was Barry's follow-up, originally released last year and was honored as one of the New York Times' 10 Best Crime Novels of the Year for 2020. (her essay on the pandemic follows this review)

It focuses on two women on the road and on the run. Cait Monaghan, a batender-slash-journalist, is putting her life back together after recently being the victim of a particularly messy Internet trolling scenario. It is midnight, and she is heading to pick up Rebecca McRae at her home in Lubbock to drive her across state lines for an important appointment the next morning.

Where Cait and Rebecca are going is revealed gradually as the two of them move through the desolate Texas roads. They were strangers until the moment Rebecca stepped into Cait's Jeep, and one thing they have in common is that they both are holding secrets. As a truck appears, it didn't take long for them to realize they're being followed, and it's somebody who is out for blood.

As their journey continues and dangers increase, the pasts they have worked hard to keep buried have come back to haunt them. Somebody wants one of them dead, but which one is it? If Cait and Rebecca hope to survive the night, they will have to learn to trust each other.

“My Thoughts on Fear in the Pandemic”

A nagging, free-floating anxiety. The feeling that something terrible is lurking just around the corner. Limiting our movements. Observing others carefully. Watching. Waiting. Anticipating the worst.

As women, we have been training for this pandemic our whole lives.

We’re used to fear. We have felt it nearly every day, whether it’s walking through an empty parking lot, or going for a run in the early hours of the morning, or sitting alone at a bar, or in a park, and watching a stranger approach. It’s a guy standing a little too close behind you in line at the grocery story. It’s a car crawling up the curb as you run errands. It’s moment you express a political preference, or a divisive idea, or critique on social media. It’s the low buzz in our ear, the tingling in our fingertips, the sickening drop in our stomachs.

To us, fear is as familiar as breath. We mitigate it, and negotiate with it, and attempt to rationalize it. We make thousands of tiny calculations on its behalf. We have spent our lives with car keys squeezed between fingers, waiting for our attacker to emerge from the mist.

These days, when I wake up in the middle of the night caught in the grip of panic wondering if the people I love will be struck down by the virus, if the town I live in will recover, if my parents are staying safe, if my nieces in California understand what’s happening, if my husband stood too close to the woman who was coughing at the grocery store, if that tickle in the back of my throat is the beginnings of a symptom, if our health insurance is good enough, if our bodies will betray us, I’m not struck by how new all this feels.  In fact, in this time of the unknown, there is almost comfort to be found in the familiarity with fear.

To live as a woman in this world, the question isn’t so much ‘What if something happens’ but ‘When? Where? How? Who?’ The answers have always been ‘Anytime. Anywhere. Anyway. Anyone.’

And now that it’s here – now that the attacker has emerged from the mist and lives in plain sight among us, dominating our airwaves and our movements and our every waking thought – there is part of me that feels grateful for all of those years of waiting.

As women, our bodies have been conditioned to feel fear, and to withstand it. More than that: to know that the question is not when will the fear end, but how can I live alongside it?

We’re all walking with our keys gripped between our fingers these days. But as women throughout history have learned, just because we live with fear doesn’t mean we have to let it dominate us, or define us.

Even though I wrote my book over a year ago, this fear we are living with now, this fear as a living, breathing thing, is the premise of my novel DON’T TURN AROUND. I hope you will take a look.