Books: A Look At The Life Of Lakers Legend Elgin Baylor 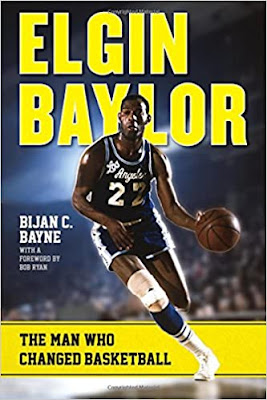 The basketball world was saddened on Monday with the passing of Lakers legend Elgin Baylor, who transformed the way the game is played, was a civil rights trailblazer, and a true superstar.

A prolific scorer who baffled his opponents with twists and turns and innovative moves, Baylor was a force both on and off the court for the Minneapolis and Los Angeles Lakers.

In the very compelling biography, which was orignally releases a few years ago, Elgin Baylor: The Man Who Changed Basketball, Bijan C. Bayne tells the story of how a kid from the streets of segregated Washington, DC, who didn't attend college until he was over twenty, revolutionized basketball and stood up for his rights. He was one of the first to speak out about racial inequality, which was remarkable for its time when few nationally prominent black athletes spoke on issues off the court.

There are reflections from Baylor's old schoolyard companions, former teammates, players he coached in the NBA, and noted sports journalists, bringing to life his childhood, college career, and professional life with intimate detail.

In this part, Bayne writes about one of the most interesting parts of Baylor's career and a battle he had with another legend, Wilt Chamberlain: "The 1961-1962 season had hardly gotten under way when Baylor was called up by Uncle Sam on November 26. The Berlin Crisis forced many such men from their jobs and homes. Other pro athletes who did military service included Green Bay Packers halfback Paul Hornung, Yankees shortstop Tony Kubek, San Diego Chargers offensive lineman Ron Mix, and Redskins running back Bobby Mitchell. Just a few weeks before Baylor received the call, a young man from Seattle named Jimi Hendrix reported for military duty at Fort Campbell, Kentucky, home of the 101st Airborne. Baylor got to stay a little closer to home, serving as a reservist at Fort Lewis, Washington...

The Lakers prorated Baylor's $50,000 salary so that he would earn his pay for the games he was able to play. He played in the team's first 42 games through New Year's Day. When Chamberlain and the Warriors visited L.A. on December 1 and 2, Baylor scored 33 in the first game and 20 in the second. Two days later, he scored 50 against Syracuse on December 4.

A December 8 away game against Philadelphia was particularly memorable, ending in triple overtime. Before the historic contest, Wilt Chamberlain greeted Baylor, who was entering Convention Hall with his travel bag, where The Big Dipper's long legs were draped over the arena's stage. According to Milton Gross in the 1961 SPORT profile of Baylor, Chamberlain asked, 'Have you heard the news, big fella? I'm gonna be checking you one-on-one tonight.'

'I get nervous enough for a big game,' Baylor shot back. 'Don't shake me up, buddy.'

Wilt egged further, 'You're gonna be my personal pigeon tonight.'

The Lakers-Warriors game was tied at the end of regulation, 109-109. Baylor had scored 47 points, Chamberlain 53, one of the few times that two NBA players had combined for 100 points in a game. Jerry West won the game for Los Angeles in triple overtime, 151-147. Baylor added 16 points in the extra sessions, giving him 63 total. Wilt scored 25 more, finishing with 78, breaking Baylor's league record. Baylor, however, had scored his 71 in regulation time, and he preferred not to quibble over numbers. 'When I play,' Baylor told Gross for the 1961 SPORT cover article on the NBA's scoring explosion, 'I don't think about how many point I'm scoring. It doesn't mean anything to me. I like to win.' And when asked specifically about losing his high-points record, Baylor asked, 'Record? So what? We won the game, didn't we?'"