Books: "A Fatal Thing Happened On The Way To The Forum" On Life In Ancient Rome 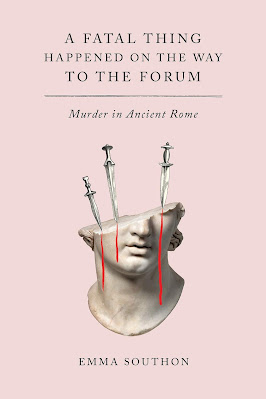 A Fatal Thing Happened On The Way To The Forum: Murder in Ancient Rome

Ancient Rome was known for many contributions to the world, but the one commonality on all stories from there was murder - even its founding.

Romulus killed Remus to found the city, Caesar was assassinated to save the republic, Caligula was butchered in the theater, Claudius was poisoned at dinner, and Galba was beheaded in the forum.

In one fifty-year period, twenty-six emperors were murdered, but what did killing mean in a city where slavery, and the devaluing of a person, was pervasive and where gladiators fought to the death to satisfy a crowd?

Dr. Emma Southon, in the new compelling book A Fatal Thing Happened on the Way to the Forum, examines a trove of real-life homicides from Roman history to take a deep look into Roman culture, including how perpetrator, victim and the act itself were regarded by ordinary people.

Inside ancient Rome's darkly fascinating history, we see how the Romans viewed life, death, and what it means to be human.

Southon writes in this excerpt: "Whenever there was a transformative moment in Roman history, there was a murder. A person died, usually bloodily and, in the space where they once lived, something entirely new emerged. Rome was built on the blood of Remus; the Republic was born from the death of Lucretia; the Empire grew from the assassination of Caesar. Rome was an unusually murder-y place.But for most of Roman history murder was not a crime. And for all of Roman history, killing in the gladatorial arena was a literal sport. the symbol of the Roman state was the fasces - a bundle of sticks containing an axe. The sticks represented the power of the state to beat its citizens, and the axe represented its right to kill them. The fasces were carried by guards known as lictors who accompanied all Roman officials whenever they left their houses, so the message was never forgotten. Few other societies have revelled in and revered the deliberate and purposeful killing of men and women as much as the Romans. The Romans were, frankly, weird about it.

But then, we as a Western society are also weird about murder. We absolutely love it. We consume it with a passion. Right now, in the US and the UK, one in every three books purchased is a crime novel, which inevitably opens with a pretty woman found dead. The crime novelist James Patterson has been the world's bestselling author for about five years. The amount of money he makes a year knocking out thrillers about gruesome murders (eighteen of which are about a 'Woman's Murder Club') is so enormous my brain can't comprehend it. The joint biggest-selling English-language author of all time is Agatha Christie, selling between two and four billion copies of her murder mystery novels...

Our Western obsession with murder as a titillating and enormously entertaining outlier makes us extremely odd in the grand cultural scheme of things. No other society has built media empires on such mountains of dead and mutilated women. But, to us, the Romans look like the weird ones because there were fascinated by murder in a different way. We have our mountains of dead fictional girls. But they had mountains of dead real men. Murder was a very literal sport. They took enslaved men and prisoners of war,forcing them to fight one another in an arena until one died violently in front of a screaming crowd of highly entertained people. Regularly. This was the number two sport in Rome (number one: horse racing) and it somewhat skewed how Romans perceived murder in the rest of their lives, along with how they viewed the fundamental notions of life and death and what it means to be a human.

"The Romans also had an institutionalize, domestic and utterly pervasive form of slavery that is hard to get your head around as a modern person who believes that every person is equal. Enslaved men, women and children were everywhere in Rome. Aristocratic homes had hundreds of people living in them who had been enslaved by the Romans. Even poorer homes might have had one enslaved member of the household. The Roman state ran on the labour of enslaved men doing the administrative and physical labour necessary to run a huge empire and build massive marble buildings covered in pretty paintings every four hundred yards. No inhabitant of Rome went without contact with enslaved persons and no one ever questioned it. No Roman ever looked at their slaves and at their freed slaves (who remained part of their household) and thought, 'Hang on a minute. These are people!' Instead, they treated these men, women and children with whom they shared their houses as though they were chairs. Things that could be abused and kicked and disposed of without, for the most part, any consequence. And everyone agreed that was fine and normal and right. And that also rather messed with their notions of right and wrong and life and death too."