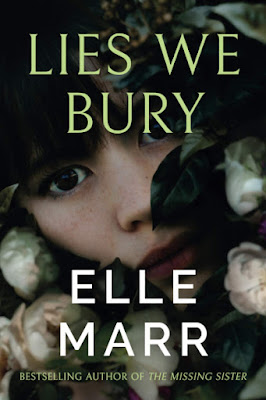 In her novels, Elle Marr tells powerful and compelling stories of women who demonstrated resilience in the face of great obstacles. She believes representation matters, and as a first-generation Chinese-American on her father's side, she is passionate about including mixed-race, Asian-American characters who look like her in her novels.

Marr's debut novel, The Missing Sister, which was released exactly a year ago, was a #1 Amazon bestseller, #1 in the Kindle Store, an Amazon Charts bestseller, featured in Woman's World, and named one of PopSugar's "31 Thrillers of 2020." Marr's essays have been published in CrimeReads and Criminal Element.

A Sacramento native, Marr graduated from UC San Diego before moving to France, where she earned a master's degree fro the Sorbonne University in Paris. She began writing novels out of a desire to explore the mixed-race experience and the question of cultural identity in fiction.

Lies We Bury is Marr's new novel, and just like The Missing Sister, it is a riveting psychological thriller. The novel unspools in two timelines, past and present, revealing both an unspeakably dark childhood in captivity more than two decades ago and the indelible scars of the current day.

Marissa Mo is a young woman who is determined to suppress her memories and turn her back on the relentless press and notoriety that have followed her and her sisters around ever since their harrowing escape. Now, she has a new identity and a promising career working as a freelance photographer in Portland, Oregon.

When Marissa accepts a job with the Portland Press, she is set to cover a string of gruesome murders that have occurred in the Shanghai Tunnels below Chinatown. She cannot deny that the clues that are left behind are eerily, terrifyingly familiar, from the claustrophobic spaces to the sad trinkets and toys, which were identical to those Marissa had as a child as she was held hostage in a dank basement.

There is then a note that is undeniably meant for her: See you soon, Missy.

To determine the killer's next move and understand why they are somehow intrinsically connected, Marissa must face up to the jagged truth of her history and confront the true nature of revenge.

Why I Wrote Lies We Bury - By Elle Marr:

As a young woman in my twenties, living in Hollywood and training for a half-marathon, I had running routes mapped all over the city. One morning, I was jogging down Sunset Boulevard when I heard a man's voice behind me. A quick glance over my shoulder confirmed he was on a bike and was probably asking me to move to the left. I bobbed to the shoulder of the cracked concrete and waved him forward. Still, I could hear him.

The words were unintelligible against the din of Los Angeles, a cacophony even at sixty-thirty; but this stranger's low purr remained. Steady. Consistent. Directly three feet behind me, and keeping pace with my easy jog. The hair on the back of my neck stood taut and my muscles rippled, acutely aware of his gaze locked on the swish of my athletic shorts. I wondered, should I stop and confront him? Tell him to go around or to leave me alone? But then I would reduce the tiny barrier of space between us to nothing.

He followed me on his bike, muttering suggestively all the way to the crowded La Cienaga Boulevard. I darted across the road to run back home on the other side. When I was far enough away and no longer heard him, I peeked back to the intersection; he was gone.

Although I never knew what exactly he was saying, the sound of the bike's shifting gears pursuing me, the clear sidewalk path ahead with room for him to pass, the fact that we were the only two people on the block told me enough. I was being harassed because I was a woman alone, and, in that man's eyes, vulnerable.

For the remainder of my training before the race, I continued to run - but with pepper spray in hand.

Women must gauge on a daily basis whether these forms of low-level danger and harassment might morph into extreme threats. As I ran home and during the runs that followed, my mind wandered to what might have happened if I were running in a park, at night, with music blaring in my ears. Did Jaycee Dugard, Amanda Berry, or Elizabeth Fritzl have moments of foresight where they imagined what would befall them- not for ten minutes, but ten years?

Lies We Bury begins twenty years after a traumatic experience has ended to explore what happens once the worst things we can imagine are in the past. As I wrote this novel, I wondered what coping mechanism becomes the proverbial pepper spray - if we indeed choose something empowering instead of self-destructive; if we are able to move forward at all? I wanted to know what happens when the stranger behind us reappears.

While Marissa and her sisters survived the greatest horror many of us can fathom - being born in captivity and of violence - they each manage that truth in very different ways. In shifting between timelines, Lies We Bury examines how these women reconcile their lives with their origins, and as survivors, whether they demonstrate their own brands of resilience.