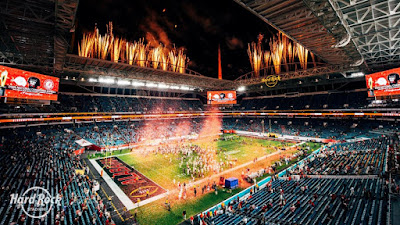 This capped a season that contained many twists and turns, including the Big 10 Conference canceling their season and reversing their decision in mid-September. Along the way, they faced plenty of naysayers who said it couldn't be done - here's looking at you, New York Times, and your countless pieces asking if it was worth it. The SEC and Big 12 each had only two games canceled, so they proved it could be done, just as the NFL has done.

The season featured memorable performances from quarterbacks Trevor Lawrence of Clemson and Justin Fields of Ohio State, who were leaders in the "We Want to Play" movement last summer and squared off in the College Football Playoff.

Memphis quarterback Brady White was awarded with the 2020 William C. Campbell Trophy at halftime of the championship game Monday night, which was attended by 14,926 fans at Hard Rock Stadium in Miami Gardens, Florida.

The National Football Foundation (NFF) and College Football Hall of Fame, on Wednesday, saluted "all those who payed a critical role in 2020 during the pandemic to ensure that the players, coaches, and fans had the opportunity to experience the game in safe environments.

NFF Chairman Archie Manning said in a statement, "The college football community just concluded the most challenging football season in out lifetimes as the global pandemic has impacted every aspect of life. This summer, the college football season appeared uncertain, but as the fall approached the leaders of our sport rallied. They found ways to address health and safety concerns, and thanks to their herculean efforts and many sleepless nights, the season happened, albeit with a few twists and turns.

"It's been truly remarkable, and everybody has had to make sacrifices. The players, the coaches, administrators, parents, fans, bowl organizers, medical staff, all top a truly endless list of people who made the season happen. We especially want to salute the 10 commissioners in the FBS and the leadership of the College Football Playoff and the bowl games for all they did to create experiences for the student-athletes who play our game, many for their coveted final senior seasons, while realizing there were countless others who had to sit on the sidelines because of the pandemic."