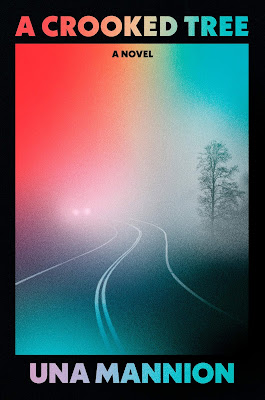 A Crooked Tree: A Novel

Una Mannion is a Philadelphia native who left the United States for Ireland in her early twenties, and she has won numerous prizes in that country for her work.

A Crooked Tree is Mannion's first novel, a tale about growing up and evolving out of childhood, while exploring the unintended consequences that arise when a family has secrets.

It is a compelling work that transports you to summer nights when teens gather in empty fields, have the beer keg in the corner, and skinny dip in local ponds. It is also a place where parents have their own secret lives, featuring clandestine meetings and midnight drives, and where the communities and homes meant to keep families together and safe are broken.

Set in 1981 Valley Forge, the story centers on fifteen-year-old Libby Gallagher, who we fined crammed in a car with her four siblings heading home. Libby's harried single mother has hit her limit with the arguing and orders 12-year-old Ellen out of the car five miles from home. Libby watches helplessly, and at that moment, a dangerous secret sets off a chain reaction that ripples throughout their lives that summer and in the future.

The story is told in Libby's voice, and her sharp, though not yet adult, eyes catalog the rich details of her siblings and their cohorts, including her brother's astronomically-themed boyhood room, her young sister Ellen's nascent artistry, older Marie's mix of bravery and cool, and the neighborhood bad boy ripping through the dark with his motorcycle.

In addition to that, Mannion recreates the touchstones of the '80s, from the music and punk fashion that marked rebellion from small town lives, to the wild freedom children had to wander between yards, in the dark, and into trouble.

When the Gallagher siblings realize they cannot rely on their mother or other adults around them, they try to look after one another, but the death of their Irish immigrant father a year earlier isolates them in their grief.

Libby begins to take solace in "The Kingdom," a stand of red oak and thick mountain laurel that saw generations of both Native Americans and colonials pass through with all their own losses.

This holds special significance for Libby because the woods are the last connection to her father, whose final gift to her was The Field Guide to the Trees of North America. It is her refuge, and the idea of safety, plus the thoughts she has clung to about her parents, love, and what adults can bear, she will have to leave behind.

Mannion, in Libby's voice, writes of the setting of this remarkable work, "Valley Forge was best known for the winter that George Washington spent there with twelve thousand soldiers of the Continental Army, camped in makeshift log cabins, trying to survive. They were malnourished, half naked, and barefoot. Over two thousand died from exposure, disease, and injuries, and another three thousand were unfit for service. Miss Esposito, our ninth-grade teacher, had said that Valley Forge was the turning point in the war, that it symbolized the revolutionary spirit and America's sense of itself. I was the only one in my class who actually was from there. When I walked through the woods on the mountain, I thought about those freezing men who came up here to drag timber and fallen branches down to the encampment, who ran through the trees, deserting the army, or who may have crawled here to lie down and die. Some weren't even men, only boys, Thomas's age...

"Valley Forge Monutain was not so much a mountain as a hill. Washington's Headquarters was less than two miles from my house if I cut through the woods. In the 1950s the mountain was zoned for housing, but the woods were preserved as a part of the park. Behind my house was the Horseshoe Trail, a hiking and bridle path that started in the park and went 140 miles until it met the Appalachian Trail in Harrisburg.

"The trail divided the mountain into two townships: Tredyffrin, where Sage lived, and Schuylkill, our side. Sage's side of the mountain seemed more affluent - houses were bigger and better kept. Schuylkill's main town was Phoenixville, an old ironworks and steel-mill town at the bottom of the mountain. While we were growing up, steel mills were downsizing, laying people off, closing. Phoenixville suffered. Marie said the town was caught in a time warp: the 1980s had started but Phoenixville was stuck in the '60s, and there weren't many prospects there for young people. On the mountain, Schuylkill kids went to Phoenixville High School and those on the Tredyffrin side to Conestoga, one of the best public schools in the state, We didn't go to either. We went to Catholic schools closer to Philadelphia.

"I spent most of my time on the mountain in the woods or walking down to Washington's Headquarters. Thomas and I had tried fishing in the Schuylkill River, which ran alongside it. He said we could try for catfish or perch. We never caught anything, and the riverbank smelled like sludge, with hubcaps, old toasters, and other garbage visible in the shallows. On the mountain, off-trail, there were traces of old quarters in the woods, and at the bottom of my road, about a quarter of a mile in, was a deep ravine that used to be a quartzite quarry. They would mine the quartzite ore and bring it awa to be crushed into sand. Quartz was everywhere on the mountain - giant glimmering rocks sitting on the surface of the earth and flashing edges jutting up from the ground, as it it were growing there. Dad told me that in prehistoric Ireland, quartz was sacred and was buried with the bones of the dead."