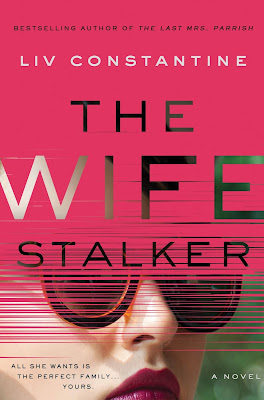 The Wife Stalker: A Novel

Liv Constantine is the pen name of the sisters and best friend writing partners Lynne and Valerie Constantine. Together, they are the bestselling authors of The Last Mrs. Parrish, their debut thriller in 2017 that was a Reese Witherspoon Book Club selection and is currently under development for a TV series; The Last Time I Saw You, which has been optioned for a feature film; and The Stranger in the Mirror, which is coming out in July 2021.

The Wife Stalker was originally released last spting, and is now available in paperback. This addictive psychological thriller centers on a woman fighting to hold onto the only family she has ever loved, and how far she'll go to preserve it.

Piper Reynard, a stunning woman in her thirties, sets down roots in Westport, Connecticut, opening a rehab and wellness space and joining a local yacht club. When she meets Leo Drakos, a handsome, successful lawyer, his wedding ring is the only things she doesn't like about him. However, as Piper knows well, no marriage is permament.

Leo's wife, Joanna, has been patiently waiting for him to re-emerge from depression and turn back into the charismatic man she fell in love with years ago. She is thankful when he returns to being his charming, energetic self while paying attention to her and their children, Evie and Stelli, but she is stunned to discover that it's something else that has lit a fire under him.

It's Piper who has drawn the attention of Leo, and he is willing to leave everything behind. Joanna assures him he can still see their children, but she is devastated and willing to find something to use against the woman who has stolen her life and her true love.

As Joanna digs into Piper's past, she unearths disturbing secrets, but when she confides in her therapist that she fears for the lives of her ex-husband and children, her concerns are dismissed as paranoia. Will she be able to find the proof in time to save them?

As with Live Constantine's previously acclaimed works, this one will draw their readers in with the many twists and turns that accompany this complex tale.

The Wife Stalker is told in both Joanna's and Piper's voices, with each alternating chapters. In this excerpt, Joanna is reacting to Piper meeting Leo outside of her yoga studio:

"The morning after the clearly-not-business dinner, I knew I had to take some kind of action, but I was having trouble coming up with a next step that didn't make me seem like a jealous shrew. Finally, it came to me in a flash. I would email Piper and tell her I'd like to take her up on her offer of a free class at her 'recovery and healing center,' to get a look at her in her own element. I knew that yoga was going to be a stretch for me - pun intended. I've never been much of a gym person; at most, I hop on the treadmill for half an hour or so, and much prefer walking or swimming. I guess that's why I don't wear a single-digit size. I figured I'd stick to the back of the class and hopefully nobody, especially Piper, would notice my ineptitude.

I'd gone online to google some basic moves so that I'd know my Downward Facing Dog from my Tree, which, if you ask me, are ridiculous names. The Warrior poses, however, I can get behind - at least they make you sound like you're kicking some ass. Clad in black Lycra and carrying a newly purchased yoga mat, I took a spot in the crowded studio. I was relieved to see the low lighting and had to admit the music coming from the speakers - which had been designed to look like stones - was soothing. How hard could it be? I thought. It was yoga. But then I paid closer attention to the women surrounding me. Women who looked like they could bounce a quarter off their bicep muscles. Tanned, blond, boasting diamond rings on their left hands that could have served as brass knuckles, all of them - every single one - looked as though they hadn't eaten in weeks. Tank-Top Girls, I call them. You didn't get into that kind of shape by just breating and stretching. Even though this was billed a beginner's class, it was clear to me these women had done yoga before.

Two minutes before the hour, Piper walked in dressed in sky-blue yoga pants and a sports bra that showed off her six-pack. Everyone stood at attention, staring as if she were royalty. Her long blond hair was pulled back into a slick ponytail, her perfect complexion devoid of makeup. Even bare-faced, she was stunning.

'Hello, everyone! It's a beautiful evening to get healthy! Any newcomers today?'

I wasn't about to raise my hand since she'd already acknowledged me with a nod when I first walked into the center. A woman in the front  raised hers, fortunately, and Piper focused her attention there.

'Welcome! Go at your own speed. Remember, we're all running our own race.'

I groaned inwardly. It was like she'd memorized a book of platitudes. I tried to keep y eyes on her, but it was difficult in some of the positions my body had to endure. I might have been wrong about loving the Warrior poses - my legs trembled as I tried to hold Warrior Two. From the glances I was able to steal, Piper was an unquestioned star at yoga. Her body did amazing things. I'd already known my figure was no match for hers, but with her agility? Forget it. Men probably wanted to tumble into bed with her the first time they saw her. My face burned at the thought of Leo thinking that about her."