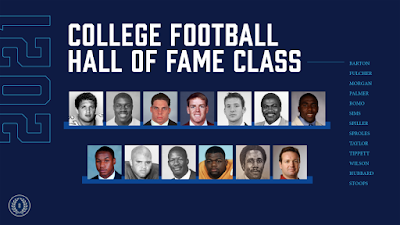 The National Football Foundation revealed the illustrious 2021 class of the College Football Hall of Fame on Monday afternoon, which features 11 All-Americans and two coaches.

One inductee, Tony Romo, heard the news from his NFL on CBS broadcast partner, Jim Nantz, during their call of the Saints-Bears NFC Playoff game on Sunday evening.

"I was just thrilled to give Tony and his distinguished college career its just due on national television," Nantz told Brooklyn Digest. "He was really excited by the recognition. I know he didn't want a big fuss made over it but if your friends can't salute you, then who can?! Overall, a fun 'break in the action' for those of us who think the world of Tony."

Archie Manning, the NFF Chairman and a 1989 College Football Hall of Fame inductee, said in a statement, "Each of these men has established himself among the absolute best to have ever played or coached the game, and we look forward to immortalizing their incredible accomplishments."

NFF President Steve Hatchell said of the 2020 and '21 classes in a statement, "With two College Football Hall of Fame classes, the NFF Annual Awards Dinner will prove to be one of the biggest events in the NFF's history when it returns this December. We are beyond excited to announced the 2021 electees and look forward to maing induction worth the wait for the 2020 class."