Books: "Prayer For The Living," A Collection Of Shorty Stories From Ben Okri 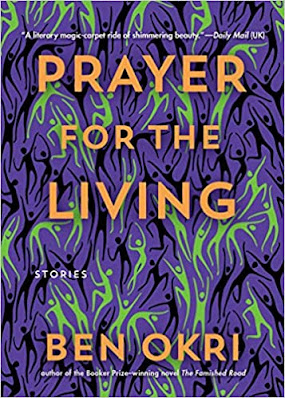 Prayer For The Living: Stories

Ben Okri was born in Minna, Nigeria. His childhood was divided between Nigeria, where he saw the consequences of war firsthand, and London. Okri won the Booker Prize in 1991 for the Famished Road, and his novel Assmbling the Gods was selected as one of the BBC's "100 Novels That Shaped Our World."

Okri is a fellow of the Royal Society of Literature, a vice president of English PEN, and has been awarded the OBE as well as numerous international prizes and honorary doctorates. His latest novel, The Freedom Artist, was published by Akashic Books.

Prayer for the Living is a collection of short stories that are topical and timely, stories that blur parallel realities and walk the line between darkness and magic. It is playful, frightening, shocking, stories that come from a writer at the height of his power that will make you think, or make you laugh. Some will make you want to look away, but they will always hold your gaze.

These twenty-four stories are set in London, in Byzantium, in the ghetto, in the Andes, and in a printer's shop in Lagos. Characters include a murderer, a writer, a detective, a woman in a dream, a man in a mirror, a little girl, a prison door, an the author himself. Each story will make you wonder if what you see in the world can really be all there is.

She had always wanted a doll's house. As soon as she was old enough, Hyacinth asked her parents for one. Her mother was doubtful; she thought it would distract her daughter from real life. Her father felt it could provide a useful education in running a house. He was so taken with this notion that he had a doll's house commissioned at once.

He wanted it to be gigantic and the exact replica of their own house on Baker Street. His precise instructions required a fiendish architect. When it was delivered, he found its replication perfect in scale and detail. Hyacinth was so fascinated that she spent hours comparing it with the original.

She spent most of her time making the doll's house as like their real house as possible. She filled it with her imagination. She slept and woke in one of its rooms. In another of its rooms lived Mum and Dad. The kitchen below, the servants' room at the back, were all living places in her mind.

She continued in this game till one day she imagined a stranger paying a visit to their house. She imagined him a peddler of stones and magic lamps that she had read of in books. Then a week later such a stranger, just like the one she had imagined, knocked on their door. He stood in the gaslight, a peddler of blue stones. The servants were about to send him away, but Hyacinth begged her father to let him in. He had piercing eyes and wore a red turban. He was from Kazakhstan and had walked the Silk Road. When he stepped into the living room and saw the doll's house, he said: "It is just so I dreamed it."

"What on earth do you mean?" her father said.

"Do you mean the doll's house?"

"Yes. Your daughter summoned me here. I have come. What do you want of me?"

"Can you make the little house come alive?" Hyacinth asked.

The stranger turned his fierce blue eyes on her. "The little house lives!" he said, placing a blue stone in Hyacinth's palm.

Before the father could protest, the stranger was gone.