Books: "How I Learned To Hate In Ohio" By David Stuart MacLean 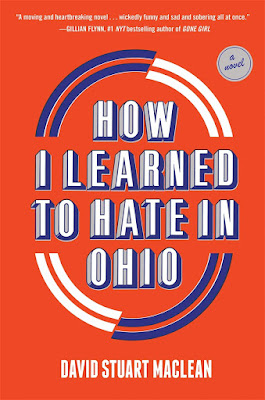 How I Learned To Hate In Ohio: A Novel

David Stuart MacLean published his award-winning memoir, The Answer to the Riddle, in 2014, and he told the story of his frightening bout with mefloquine-induced delirium and amnesia. His work has appeared in outlets such as the New York Times, Ploughshares, and Guernica, and on This American Life.

How I Learned To Hate In Ohio is MacLean's debut novel, a brilliant, hilarious, and ultimately devastating story of the growth of racial discord in the United States. Set in rural Ohio in the 1980s, Barry Nadler begins his freshman year of high school with low expectations.

Bright but mostly without friends, he resolves to go under the radar as much as possible, until his world is upended by the arrival of a Sikh teenager who moves to his small town. Charismatic and wildly conspicuous, Gurbaksh, who went by "Gary" for short, befriends Barry and pulls him into a series of increasingly unlikely adventures.

As their friendship deepens, Barry's sheltered life begins to unravel, and his classmates and family react to a family that is so much different than those in their small town. Barry reveals how the seeds of xenophobia and racism find fertile soil in this insular and homogenous society in the form of darkly comic and bitingly intelligent asides and wry observations. However, in an easy, graceless, unintentional slide, tragedy ensues.

In this excerpt, Barry describes one of his classes,and it is sure to bring back memories: "In English class the mousy Mr. Morris handed our paperback copies of The Great Gatsby and announced that we'd be spending the next six weeks reading it. It was a tiny book, something an illiterate person could finish in a long weekend and we'd be spending a month and a half on. He passed out shopping bags next. The rest of the period was to be spent making a cover for the book. He had three scissors for the entire class and two boxes of crayons borrowed from the art class. Most teachers had us cover our books as a homework assignment so this said something about the state of affairs in Mr. Morris's lesson plans. This was the laziest busywork.

Mr. Morris had been sick recently, coughing and such, so maybe that's why he was phoning it in.

After hearing everyone effuse about Gatsby as the American novel, I'd readit in sixth grade. As a love story, it was lacking. Unless it was people in love with themselves. Daisy was in love not with Gatsby but with the Gatsby saw her. And Gatsby was in love with being worthy of Daisy. No one was in love with Tom. Even Myrtle wasn't in love with Tom but with the opportunity she saw in him. She could escape her crappy marriage and the valley of ashes she found herself wallowing in. And Tom liked Myrtle because of how she looked at him and because she was disposable. The only real love story was Jordan Baker and Nick Carraway and Nick doesn't even realize that she's in love with him. Everyone is so oblivious. It's just hard to buy that adults are that unaware.

Normally I'd love a book that cynical. But I'm not sure it's meant to be that cynical. It's written in such pretty prose and that prettiness doesn't seem to carry its negativity. Like a pair of brass knuckles in wet paper towels. Also it might be full of the absolute shittiest "symbols" in all of high school English classes. The green light Gatsby is always staring at, Dr. J.T. Eckleburg's billboard, the clock Gatsby almost knocks over in Nick's little house when he sees Daisy again (objective correlative much?). Like The Scarlet Letter, it might be the Great American Novel because it's easy to teach.

The best thing about Gatsby is the cover. The weirdo face hanging above the streaks of nighttime traffic. If we're going to have to write a book report on this thing, which, if we're going to spend six weeks on it, is a guarantee, I want to write about the cover. It's haunting. But that's what we were tasked with covering up in our first lesson.

"Barry, you're daydreaming again," Mr. Morris called from his desk. He was picking at these purple dots on his scalp, old man zits or something. "Please catch up with the rest of the class. C'mon, cover your book."

I finished covering it in five minutes. I spent the rest of the class making a detailed crayons drawing of Myrtle Wilson getting hit by Gatsby's car, a drawing which would almost guarantee another trip to the guidance counselor.