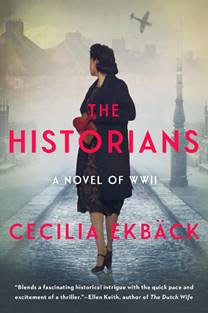 The Historians: A Novel Of WWII

Cecilia Ekback was born in Sweden in a northern fishing town. Her first novel, Wolf Winter, won a High Plains Award and an HWA Goldsboro Debut Crown. Her second novel, The Midnight Sun, was published to wide acclaim. She lives in Canmore, Alberta, Canada with her husband and twin daughter.

In the new novel The Historians, Ekback aims to give a Scandinavian perspective to World War II, which has not been documented much in literature. The more research she did, the more horrified she became, saying, "Sweden was the first country in the world to set up a Racial Institute to study eugenics and human genetics in 1922, but they were by no means alone. Race thinking was prevalent throughout the world at the time as an accepted science. I wondered, under the 'right' (wrong) circumstances, how far people would have been prepared to take their thinking. This is how The Historians was born."

Set in Sweden in 1943, right in the depths of World War II, the story focuses on a brutal murder that leads to a hunt for a ruthless killer and uncovers a shadowy conspiracy intent on engineering a chilling postwar future.

Heiress Laura Dahlgren, despite her father's objections, works tirelessly along the chief negotiator to Germany as he conducts critical talks with the Nazis.

Sweden's neutrality is precarious, and like so many of her fellow Swedes, Laura is reluctant to attract any unnecessary attention. Then, Britta, her magnetic former best friend, goes missing. While they were at university, they were part of an inseparable clique of five brilliant historians stimulated by ideas and each other.

"There had been five of them, inseparable, until the war brought occupations of Denmark and Norway," Eckback writes. "They'd always ended up in her apartment in the early morning hours, drunk - the only difference to what degree - Laura, Matti and Karl-Henrik in the red velvet armchairs, Erik and Britta on the settee. They'd crack open one more bottle, lounge and gaze up at the painting on the ceiling, the one Matti swore must be a Julius Kronberg: a light blue sky veined with thin white clouds on which perched small golden-haired cherubs: naked women stretched on the rocks beneath, their hands in the air trying to touch the cupids. Futile Desire, Erik had named the artwork. Books were piled everywhere on the floor, balancing on the window sills, throwing candlelight shadows like a landscape of miniature buildings in the dimmed room."

Their bond was fractured by the outbreak of war, but now Laura gets involved reluctantly in the search for Britta's killer, and is the one to discover her mutilated corpse. Racked with guilt, she vows to solve the crime, even if it means putting her career, and by extension, her own life, at risk. Her investigation leads to the heart of the Swedish government.

Dedicated public servant Jens Regnell, the secretary to the Minister of Foreign Affairs, is busy trying to help stabilize Sweden's relationship with Hitler while also wrestling with suspicions about some of his colleagues.

Before she was murdered, Britta had sent him her PhD thesis about racial profiling in Scandinavia. Jens, who is puzzled by the cryptic document and the dead woman's intentions, teams up with Laura to unravel the mysteries.

This dangerous hunt for answers sprawls from the epicenter of power in Stockholm to the campus in Uppsala to the mines in Lapland, and raised many unsettling questions about everything they value. While confronting elusive enemies, it's almost impossible to distinguish those who can be trusted from those who cannot.

Fighting their way through a maze of treachery and deception to arrive at the truth, Laura and Jens must stop a shocking plan to change the face of Sweden forever - if they're not too late.