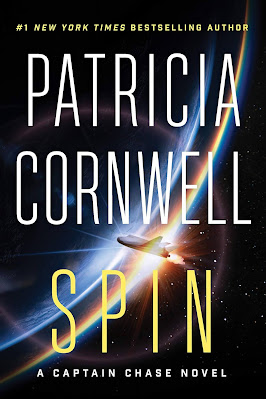 If you enjoyed the first installment of the Captain Chase thriller series, Quantum, this one picks up right where that one left off.

Spin opens at the finale of that landmark work, during the aftermath of a NASA rocket launch gone terribly wrong. While dealing with a deadly storm, Captain Calli Chase comes face-to-face with her missing twin sister Carme. She also faces the startling truth of who they really are.

A top-secret program put in motion years ago has spun out of control, and only Calli can redirect its course. With the use of cutting-edge technologies, the NASA investigator and scientist turned Space Force pilot goes on a frantic search for the missing link between the sabotaged rocket launch and her predetermined destiny. It is a search that someone else seems very determined to stop.

Calli plays a high-stakes game of hide-and-seek that takes her from NASA to the Chase family farm, to the White House, to the distant orbits of space with a cunning and ruthless adversary. One wrong move will unleash cataclysmic consequences that reach far beyond the boundaries of Earth.

Cornwell writes in this excerpt: "Blasting snow in my headlights like a white tornado, the run-flats pushing through unplowed powder on Wednesday morning, December 4.

Since driving away from NASA Langley Research Center two slow miles ago, it's as if I'm the last person left on the planet. My hometown of Hampton, Virginia, is almost in a brownout as if we're in the middle of a war, businesses and homes I pass empty and pitch dark. Streetlights are widely spaced smudges that illuminate nothing, and I can't make out most traffic signs until I'm on top of them.

The Dollar General store is off to my right, dense woods to my left, Anna's Pizza & Italian Restaurant up ahead according to the GPS satellite map. Otherwise, I wouldn't know where I am, visibility a car length when I'm lucky. At times I can't tell which lane I'm in as gale-force gusts and supercans airborne and tumbling, sipping holiday lights and decorations from their moorings.

On this stretch of North Armistead Avenue alone, a Santa on his sleigh took flight from a rooftop, crash-landing in the median strip while life-size figures from a nativity scene scraped across a church parking lot. An inflated Grinch was gone with the wind after snapping his tether, and just now an American flag still attached to its pole cartwheels by in front of my Silverado.

Trash, leaves, branches, wreaths, all sorts of things are flying about as if I'm headed to Oz in a near whiteout. It would have made sense to stay put at work. Certainly, I know better than most the important of sound judgment. I can cite chapter and verse about human factors that will hurt or kill you, such as being sleep deprived, preoccupied and somewhat traumatized while driving in a blizzard.

But no way I was bunking down in the NASA firehouse or on the Air Force base after an all-nighter that included an exploding rocket, and almost losing an astronaut on a spacewalk. If that wasn't enough, I was tackled by a posse that confused me with my identical twin sister, just to mention a few solar-flaring urgencies with more on the way.

Assuming Neva Rong is the mastermind, we've seen nothing yet, the tech billionaire's agenda universal dominance at any price or sacrifice. All to say I don't anticipate a peaceful Christmastime, maybe nothing peaceful ever again, and what I need right now is to get away from work even if for a few hours.

I'm desperate to take off my boots, tactical clothing and gun, to shower in my own bathroom. I intend to sit in my usual chair at the kitchen counter watching Mom whip up the latest threat. It's time we have one of our private chats, nobody in our airspace to interfere or overhear (including Dad). I'm going to make her spill the beans (as we say in the Chase family).

But not until I first sweep the house with one of my spectrum analyzers, going room to room, walking in circles holding up various mobile antennas like Ghostbusters. I'll make sure there are no rogue transmissions, no surveillance devices, nothing that might indicate the invisible presence of uninvited cyber spooks."

ABOUT THE AUTHOR: Patricia Cornwell sold her first novel, Postmortem, in 1990 while working at the Office of the Chief Medical Examiner in Richmond, Virginia. It went on to win the Edgar, Creasey, Anthony, and Macavity Awards as well as the French Prix du Roman d'Aventure prize - the first book ever to claim all these honors in a single year.

It grew into an international phenomenon, with the Scarpetta series winning Cornwell the Sherlock Award for best detective created by an American author, the Gold Dagger Award, the RBA Thriller Award, and the Medal of Chevalier of the Order of Arts and Letters for her contributions to literary and artistic development.

Cornwell went on to write the definitive account of Jack the Ripper's identity (Portrait of a Killer: Jack the Ripper - Case Closed), cookbooks, a children's book, a biography of Ruth Graham (Ruth, a Portrait: The Story of Ruth Bell Graham), and two other fictional series based on the characters Win Garano (At Risk and The Front) and Andy Brazil (Hornet's Nest; Southern Cross; and Isle of Dogs).