Books: "A Stranger At The Door" By Jason Pinter 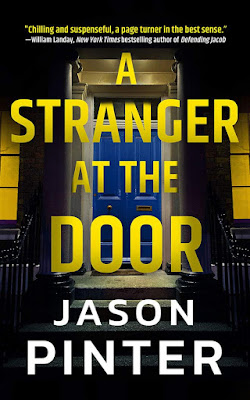 A Stranger At The Door

In this Book Two of the Rachel Marin series, the single mother is finally in a good place. After many tough years, she has found both s stable, loving relationship and a new purpose in life, putting her investigative skills to work solving crimes for the local police department.

Just as soon as everything is falling into place for Rachel, a shocking event takes place. Her teenage son's teacher is gruesomely murdered, starting a ripple effect that shatters her peaceful existence.

When Rachel comes across an ominous email the teacher sent to her just before his death, she knows she must help bring his killer to justice. Then, a figure from her past reappears and threatens to expose Rachel's darkest secrets if she doesn't tread lightly.

The search took a very personal turn when her son is  recruited by a shadowy businessman who may be connected to the murder. Someone out there is dead set on keeping this grisly cover-up buried, which means if Rachel's not careful, it's only a matter of time before her dream turns into a nightmare.

In this excerpt, Pinter writes of the deceased teacher: "The day Matthew Linklater was murdered, he taught three social studies classes, caught Becca Matheson and Steve D'Agosta making out in the north stairwell, refused to loan his sister any more money on account of the fact that she'd already borrowed nearly six grand from him and there was as much chance of getting repaid as there was of finding coffee on the moon, and responded to three messages on dating apps during his lunch break.

Though never married, Linklater had steadfastly refused to participate in the fetid swamp that was online dating, despite the sadistic urging of his (married) friends. He found no dignity in crafting a focus-group biography expected to contain a measure of wit, a soupcon of self-deprecation, a hint of worldliness, and a heap of confidence, all in support of curated, flattering photographs of himself doing exotic things like posing alongside tigers while holding a freshly caught three-hundred-pound swordfish. But Edward Li, the school's forty-six-year-old chemistry teacher, had met his wife on one of those infernal swipey things, and as Li recalled it, they knew from the moment they met that they had 'an immediate and unbreakable covalent bond.' Three cheers for chemistry humor.

Had Linklater known the date and manner of his death, he would have tried to squeeze as much happiness into his relatively short life as possible before it was taken from him with an unimaginable amount of pain and terror."