Books: New Books For The New Month Of February

As we enter February, there are plenty of new novels to check out and enjoy while still spending time at home in the heart of winter. These books will be perfect to curl up with on cold nights and escape. In this review, we will look at Water Memory, by Daniel Pyne; We Can Only Save Ourselves, by Alison Wisdom; Hadley & Grace, by Suzanne Redfearn; Gerta, by Katerina Tuckova; The Ardent Swarm, by Yamen Manai; and Until We Are Lost by Leslie Archer. 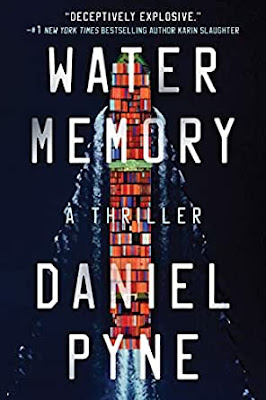 Daniel Pyne is the author of four novels, Catalina Eddy, Fifty Mice, Twentynine Palms, and A Hole in the Ground Owned by a Liar. He has written many screenplays, including Pacific Heights, Doc Hollywood, the remake of The Manchurian Candidate, and Fracture. He made his directorial debut with the independent film Where's Marlowe? His television career, in which he has creating, writing, and showrunning credits, spans from Miami Vice to Bosch. In addition, he has worked as a screen painter, a sportswriter, an ad man, and a cartoonist. He has also taught screenwriting at the UCLA School of Theater.

Pyne's newest novel, Water Memory, is a fast-paced thriller that contemplates the consequences of motherhood, memory, and crime as a commodity. Black ops specialist Aubrey Sentro may be one concussion away from death, but when pirates seize the cargo ship she's on, she must decide whether to risk her own life to save her fellow passengers. Sentro's training takes over and she is able to elude her captors, leaving bodies in her wake.

Sentro's problems are just getting started, as her memory lapses are getting more frequent, as they are symptoms of serial-concussion syndrome. As she is engaged in a deadly cat and mouse game with the pirates, she pushes herself to survive by focusing on thoughts of her children. She's never told them what she really does for a living, and now she might not get the chance.

The thing about Aubrey is that while her memories make her vulnerable, it's motherhood that makes her dangerous. 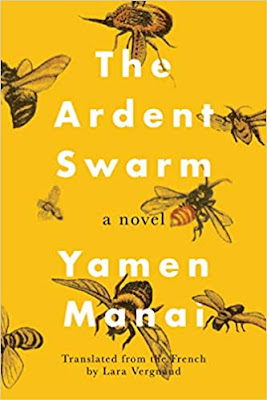 Yamen Manai was born in Tunisia in 1980, and currently lives in Paris. He is both a writer and an engineer, and explores the intersection of past and present, as well as tradition and technology, in his prose.

Three of his novels have been published with the Tunisia-bases Elyzad Editions, which is a deliberate choice to ensure his books are accessible to Tunisian readers: La marche de l'incertitude (2010), which was awarded Tunisia's prestigious Prix Comar d'Or; La serenade d'Ibrahim Santos (2011), and L'Amas ardent (2017), which earned both the Prix Comar d'Or and the Prix des Cinq Continents, a literary prize that recognizes exceptional Francophone literature.

In The Ardent Swarm (originally published as L'Amas ardent), Manai's first book that's been translated into English, he celebrates Tunisia's rich oral culture, a tradition abounding in wry, often fatalistic humor. It is a stirring allegory about a country in the aftermath of revolution and the power of a single quest.

Sidi lives a heretic life as a bee whisperer,  tending to his beloved "girls" on the outskirts of the desolate North African village of Nawa. He wakes one morning to find that something has attacked one of his beehives, brutally killing every inhabitant. Heartbroken, he soon learns that a mysterious swarm of vicious hornets committed the mass murder, prompting him to wonder, where did they come from, and how can he stop them?

If Sidi is going to unravel this mystery and save his bees from annihilation, he must venture out into the village and then brave the big city and beyond in search of answers. Along the way, he discovers a country and a people turned upside down by their new post-Arab Spring reality as Islamic fundamentalists seek to influence voters any way they can on the eve of the country's first democratic elections.

To succeed in his quest, plus find a glimmer of hope to protect all that he holds dear, Sidi will have to look further than he ever imagines. 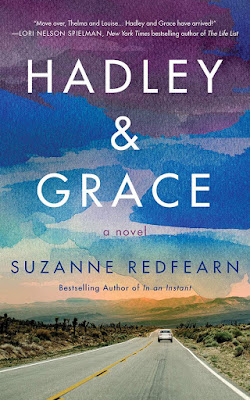 This is Suzanne Redfearn's fourth novel, coming after the bestsellers Hush Little Baby, No Ordinary Life, and In an Instant. In addition to being an author, she's also an architect specializing in residential and commercial design. She lives in Laguna  Beach, California, where she and her husband own two restaurants, Lumberyard, and Slice Pizza and Beer.

Hadley and Grace is an emotional roller-coaster ride of self-discovery in tradition of another famous tandem, Thelma & Louise.

Needing to escape her abusive marriage, Hadley has fled with her two kids,with the knowledge that it's her only chance. Hadley, a woman who can't kill a spider, soon finds herself oushed to the limits as she fights to protect her family.

Grace, new mom to baby Miles, desperarely wants to put her rough past behind her for good, but she finds it impossible when her path crosses with Hadley's. Her quest for a new life spirals out of control rapidly and it turns into a terrifying flight for survival.

When they find out that they're stronger together than apart, their links are inextricably tied, and as the danger closes in, each must decide how much she is willing to risk for the other.

It is the powerful story of self-discovery, as two women face insurmountable odds, race to stay one step ahead of the trouble that's chasing them, and discovering new kinds of love and family along the way. Katerina Tuckova is a Czech playwright, publicist, biographer, art historian, exhibition curator, and bestselling author of Gerta and The Zitkova Goddesses. She has won multiple literary awards, including the Magnesia Litera Award for both of her books, the Brno City Award for literature, the Josef Skvorecky Award, and the Czech Bestseller Award. She is also the recipient of the Freedom, Democracy, and Human Rights Award by the Institute for the Study of Totalitarian Regimes, and of the Premio Libro d'Europa at the Book Fair in Salerno, Italy.

Gerta is the first novel by Tuckova to be translated into English, and it centers on the fate of one woman and the pursuit of forgiveness in a divided postwar world.

It is set in 1945 when Allied forces liberate Nazi-occupied Brno, Moravia. For Gerta Schnirch, daughter of  Czech mother and German father aligned with Hitler, it's not deliverance; rather, it's a sentence. Gerta has been branded an enemy of the state, and while caught in the changing waves of a war that shattered her family and her innocence, she must obey the official order.

Along with all ethnic Germans, she is expelled from Czechoslovakia. With nothing but the clothes on her back and an infant daughter, she's herded among thousands, driven from the only home she has ever known. However, this injustice only makes her grow stronger, more empowered, and more resolved to seek justice. It is a journey in search of a seemingly impossible forgiveness, and one dya, she will return to her home. 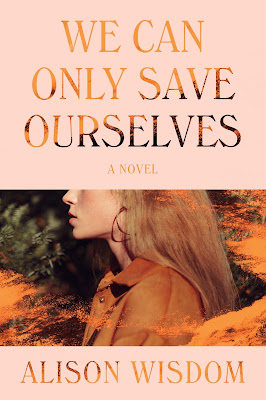 We Can Only Save Ourselves

Debut novelist Alison Williams is born, raised, and based in Houston, Texas. She has an MFA from the Vermont College of Fine Arts and was a finalist for the Rona Jaffe Foundation Writers' Award. Her short stories have appeared in numerous outlets, including Ploughshares, Electric Literature, The Rumpus, and Indiana Review.

We Can Only Save Ourselves is about Alice Lange, who is a high-achieving student, cheerleader, and all-around good citizen. She is the perfect emblem of her sunny neighborhood, but the night before she is expected to be named Homecoming Queen, Alice commits a shocking act of vandalism, and then disappears.

Alice hasn't been kidnapped - she has run away with a stranger names Wesley, who has promised her freedom and enlightenment in his nearly bungalow. When she arrives, she realizes that others have been given this same offer, as four young women already live there.

The new lifestyle is intoxicating at first for Alison, but as Wesley's demands on all of the women increase, the house turns into a pressure cooker. That is, until they all reach a point of no return.

Back in her home town, the neighborhood mothers worry about Alice's safety, but they also resent how she tore at the fabric of their perfect world. This leads them to question if their suburbia was ever as golden as it seemed. 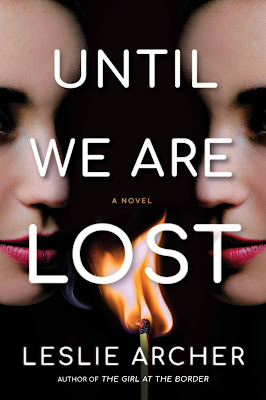 Until We Are Lost

Leslie Archer is the non de plume of a New York Times bestselling author of over twenty-five novels, including The Girl At The Border.

The haunting new thriller from Archer, Until We Are Lost, captures a woman's journey into the painful truths threatening to destroy her.

When Tara Peary's twin sister Sophie is missing, Tara dives headfirst into New York's underbelly to find her. Nobody has understood Tara like Sophie has, and Tara knows her sister isn't the only one who needs help.

In addition to this harrowing search, Tara is on the run emotionally from her complicated childhood, and her memories are threatening to overwhelm her emotions and detail the hunt for Sophie. A psychotherapist helps keep her afloat, but when Tara begins dating her therapist's young tech-millionaire neighbor, she risks being the only lifeline she has left.

As Tara uncovers more about her sister's disappearance and the dark side of the rich elite, the less certain of the truth she becomes. when Tara reaches the center of the mystery - spanning from her childhood home in Georgia to a Southern California beach - she has to decide whether the truth is a price she is willingt to pay.