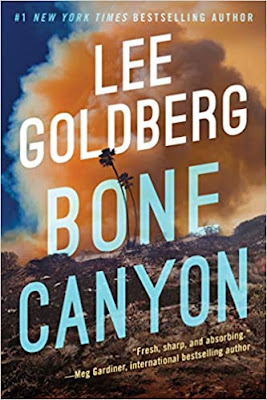 Bone Canyon is the second book focusing on Eve Ronin, coming after her debut in last year's Lost Hills. She became the youngest female homicide detective in the Los Angeles County Sheriff's Department's history after a video of her off-duty arrest of an abusive movie star goes viral.

This installment of the Eve Ronin series centers on a cold case that heats up, revealing a deadly conspiracy. A catastrophic wildfire scorches the Santa Monica Mountains, exposing the charred remains of a woman who disappeared years ago.

The investigation is assigned to Ronin, who has to prove herself again and again, and this time it is especially so. Bones don't lie, and they tell a horrendous tale. Eve digs into the past, and she unearths dark secrets that reveal nothing about the case as it seems.

With barely anyone she can trust, her Eve's relentless pursuit of justice for the forgotten dead could put Eve's own life in peril.

In this excerpt, Goldberg writes of the start of Eve's investigation: "The dead were rising in the fire-blackened Santa Monica Mountains and Eve Ronin, the youngest homicide detective in the history of the Los Angeles County Sheriff's Department, was on her way to examine one of them.

"Are you sure you ought to be driving?" asked her partner, Duncan Pavone, who took a bite out of his morning donut and rested it on a napkin that was spread out on his considerable belly. He was more than twice her age, three times as heavy, and four months away from retirement. "You just got the cast off your wrist yesterday. What if you have to make a sudden move?"

She'd been stuck at a desk for weeks, pushing paper while waiting for her wrist to heal. It was broken during the course of her first murder investigation as a member of the Robbery-Homicide Division at the Lost Hills sheriff's station in Calabasas, a small city on the northwest edge of the San Fernando Valley. Eve was eager to get out and do some real detective work again. So she was excited when they were dispatched to investigate a call from a homeowner in the Santa Monica Mountains who'd found bones in his backyard.

"My wrist is fine," Eve said, "and even if it wasn't, it's still safer than you driving with one hand on the wheel and the other holding your donut."

"What if a frightened deer leaps in front of us?"

"From where?" Eve gestured to the desolate mountains all around them as they headed south on Kanan Dume Road in their plain-wrap Ford Explorer on a hot, muggy Monday morning in mid-January. "There's no place for a deer to hide."

Six weeks earlier, a raging wildfire in Valencia, thirty-three miles north of Los Angeles, was pushed southwest by scorching Santa Ana winds. The flames converged in the Santa Monica Mountains with another blaze in Topanga Canyon to create a cataclysmic firestorm that roared through one hundred thousand acres of dry mustard weed and chaparral, devouring sixteen hundred structures before it was finally put down.

Five residents and one firefighter were killed in the inferno. But in the days and weeks that followed, the burned remains of four other people were found, corpses that had been hidden in the brush and ravines before the flames revealed them.

"What about a death-crazed raccoon?" Duncan said.

"A raccoon driven mad after the fire by pain, hunger, and thirst."

"That's heartless. I can't believe you'd do that."

"I'll be putting him out of his misery and protecting others from the danger he poses. What if he attacks a puppy or a newborn baby?"

"That's ridiculous. Why would a puppy or newborn baby be out here?"

"It's as likely as a raccoon hurling himself at a speeding SUV."

"I feel like the last man on earth in one of those Twilight Zone episodes," Duncan said, ignoring her comment and looking out the window at the desolation. "Like the guy who finally has eternity to indulge his love of reading books and then sits on his last pair of glasses."

Eve also thought there was an eerie, postapocalyptic feel to the naked mountains. There was virtually no traffic on the road. The only people in sight were utility workers installing new poles for the downed power and telephone lines.

"Then you better be careful you don't sit on your last donut," she said.

Duncan took her advice, ate the remainder of his glazed old-fashioned, then balled up his napkin and tossed it in the back seat. His nickname at the station was "Dunkin' Donuts" and this was how he'd earned it.

She made a left onto Hueso Canyon Road. The narrow strip of cracked asphalt was bordered on three sides by steep blackened slopes and above by a winding, perilous stretch of Latigo Canyon Road that ran just below the ragged ridgeline.

They passed a small winery that had been spared by the flames, but the homes on either side of the vineyard hadn't been so lucky. All that remained of them was twisted pipes, freestanding brick chimneys, toppled water heaters, and the hulks of a few burned-out cars. As Eve drove farther along, the random nature of the destruction became more evident. Four houses in a row, on the south side of the road, backed up to the mountain. The first two homes and the fourth were gone, but the third was untouched. That house was their destination.

It was two stories with a four-car garage, a red-tiled roof, and lots of stone cladding. There was something unnatural about how pristine the home and landscaping were, as if the property had been under a protective dome when the blaze swept through. The lawn and flowers, contrasted against the black ask everywhere else, struck Eve as outrageously colorful, like something out of The Wizard of Oz. The only thing on the peoperty that had burned was the fence. A few scorched posts remained, marking the property's boundary with a ghostly dotted line."