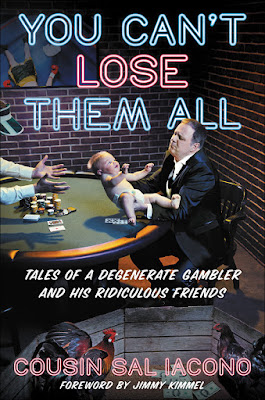 You Can't Lose Them All: Tales of a Degenerate Gambler and his Ridiculous Friends

Cousin Sal is one of the most ubiquitous television personalities, as you can see him do hidden camera pranks on his real life cousin's show, "Jimmy Kimmel Live!," as one of the panelists on the daily sports gambling show "Lock It In" on Fox Sports, and doing a comedy bit on Fox's Thursday Night Football pregame show.

In addition to that, he hosts the "Against All Odds" podcast on The Ringer network, gives his take on the weekly NFL lines on "The Bill Simmons Podcast," and just started his own sports betting podcast network, Extra Points.

In his debut book, Sal Iacono invites you into his crazy adventures, starting with growing up in Brooklyn and Long Island with Kimmel, a lifetime of winning and losing sports bets, and that time he bet his own house on the perfect March Madness Bracket.

Over the last forty years, Cousin Sal has made bets with a diverse array of people, including doctors, lawyers, bookies, bandleaders, movie stars, weed lab owners, hedge fund operators, and even professional wrestlers.

There are hilarious tales of love and loss, winning and plenty of losing, crazy family and fatherhood, and a life saga that was the inspiration for Phil Collins' song "Against All Odds."

You Can't Lose Them All is also Cousin Sal's Vegas super-system, MIT-algorithmic, sharp-approved book for how to gamble like a pro...or at least not lose it all.

Cousin Sal gives life lessons on how not to gamble your life away, including: Growing up with Cousin Jimmy Kimmel. Underage Video Poker with the Famous Aunt Chippy, who told Sal for this book, "I swear to God you little shit, if you wrote anything about me I'll kill you." That time Sal's father tried to shoot him. How Cousin Sal told his wife he bet their house. Sal's time as a referee fixing children's basketball games. Good night, Jon Hamm: How to Turn Friends into Enemies Through Fantasy Football. Cousin Sal Ranks the All-Time Gambling Greats, Real and Imagined. Hedging Your Bets: Where Sal Proves Hedging is for Gardeners.

In this excerpt, Cousin Sal writes: "When it comes to one-on-one wagers with me, nothing is off-limits. I even bet my editor how many copies of this book I could sell. That's not a joke. I wagered under 13,500 copies sold. That way, if I 'win,' I can say 'I told you so.' In fact, your purchase of this memoir could cause me to lose yet again. So thanks a lot for that.

I've bet on baseball, basketball, hockey, wrestling (pro and amateur), hot dog-eating contests, horse races, dog races, bird races, presidential elections, all levels of football - including my eight-year-old son's flag league and, of course, the Puppy Bowl. I've wagered on tennis, soccer, golf, and every type of award show that anyone has rented a tuxedo for. Not to mention reality shows like Dancing with the Stars. I've risked as much money on Drew Lachey as I have Drew Brees. So, yes, it's a problem, spread through all genres of life.

But that doesn't stop people from asking me what my worst bet or the most money that I lost as a gambler was. I think it makes them feel better about themselves to hear the answer. It's weird: most human beings know that it's inappropriate to ask a drug addict for their best overdose story, but for some reason the idea of a powerless person losing everything he has on a game of chance is amusing. I actually agree - and it is. And the short answer to what my worst loss was entirely depends on how much it hurt. The pain index relies on several factors.

Take the 2019 NFC Championship game, for instance. It was during that contest that I squandered the most I ever bet on a football game (legally) in the final moments, when a Rams defensive back wasn't called for pass interference after mauling a Saints wide receiver, like, seven seconds before the ball arrived. It was an atrocious noncall - so bad that the following season they changed the rule to allow instant replay of pass interference noncalls. But I still had a little money left over to buy my spawn a burrito at Chipotle, so it could've been worse.

Let's compare that to when I was eight years old and flipping baseball cards on the playground at Connolly Elementary School in Glen Cove, New York. I lost one hundred cards (every other third grader would risk five max) to the local bully, who figured a way to cheat and steal fro my pile when I wasn't paying attention. It was all I had and I wasn't getting then back even if I had Mets slugger Dave Kingman himself bang down the thug's door with a Louisville Slugger. So, in a way, that was my worst and most hurtful beat with many more in my future.

The more I think about it, I was destined to be a gambler. The deck was stacked against me.

My parents named me Sal Iacono. I was born in Brooklyn. Sal Iacono from Brooklyn was not going to grow up to become curator of a museum. It just wasn't happening.

Sure, I tried to buck the trend by graduating from law school, but it didn't amount to anything, as I failed the bar exam twice. (The over/under was 1.5. I won that bet with myself too...kinda.) After twenty years, I just now paid off my student loans, so maybe I won't count that as a win."