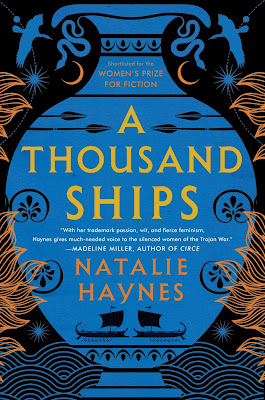 Natalie Haynes is the author of six books and is the creator of six series of the BBC's "Natalie Haynes Stands Up For the Classics." She became the first woman ever nominated for the Perrier Best Newcomer Award at the Edinburgh Fringe Festival, which she appeared at from 2002-06, and has been on tour with the Stand-Up Classics since 2010.

A Thousand Ships is her latest book, which is a beautifully inventive retelling of the Trojan War from the perspective of the many women involved in its causes and consequences.

"This is the women's war, just as much as it is the men's," Haynes writes. "They have waited long enough for their turn."

In the middle of the night, a woman is awoken and discovers her beloved city engulfed in flames. Ten unending years of conflict between the Greeks and Trojans is over, as Troy has fallen.

Haynes tells the tale of the women whose lives, loves, and rivalries were forever altered by this long and tragic war: From the Trojan women whose fates now lie in the hands of the Greeks, to the Amazon princess who fought Achilles on their behalf, to Penelope awaiting the return of Odysseus, to the three goddesses whose feud started it all.

"I wanted to tell a story of a whole war, and its effects on a whole society, instead of focusing on men's narratives, as war stories so often do," Haynes said via HarperCollins. "Women are never shown at the center of epic stories, they are always seen as peripheral or incidental. I wanted to answer the question: What if we examine the lives of the half of the world we've been overlooking? What if they are centered, and men are moved to the edge of the story?"

Since this book has been read in college forever, a lot of these names will seem familiar, and Haynes will make the women's names just as memorable. Instead of Agamemnon, you'll read the perspective of his wife, Clytemnestra. Instead of Aeneas, his wife, Creusa, describes how she endured the fall of Troy.

In this excerpt, one of the Deities, Calliope, the muse of epic poetry, who is the main narrator, is responding to Homer's famous invocation: "Sing, Muse, he says, and the edge in his voice makes it clear that this is not a request. If I were minded to accede to his wish,I might say that he sharpens his tone on my name, like a warrior drawing his dagger across a whetstone, preparing for the morning's battle. But I am not in the mood to be a muse today. Perhaps he hasn't thought of what it is like to be me. Certainly he hasn't: like all poets, he thinks only of himself. But it is surprising that he hasn't considered how many other men there are like him, every day, all demanding my unwavering attention and support. How much epic poetry does the world really need?

Every conflict joined, every war fought, every city besieged, every town sacked, every village destroyed. Every impossible journey, every shipwreck, every homecoming: these stories have all been told, and countless times. Can he really believer he has something new to say? And does he think he might need me to help him keep track of all his characters, or to fill those empty moments where the metre doesn't fit the tale?

I look down and see that his head is bowed and his shoulders, though broad, are sloped. His spine has begun to curve at the top. He is old, this man. Older than his hard-edged voice suggests. I'm curious. It's usually the young for whom poetry is such an urgent matter.  crouch down to see his eyes, closed for a moment with the intensity of his prayer. I cannot recognize him while they are shut.

He is wearing a beautiful gold brooch, tiny leaved wrought into a gleaming knot. So someone has rewarded him handsomely for his poetry in the past. He has talent and he has prospered, no doubt with my assistance. But still he wants more, and I wish I could see his face properly, in the light.

I wait for him to open his eyes, but I have already made up my mind. If he wants my help, he will make an offering for it. That is what mortals do: first they ask, then they beg, finally they bargain. So I will give him his words when he gives me that brooch."