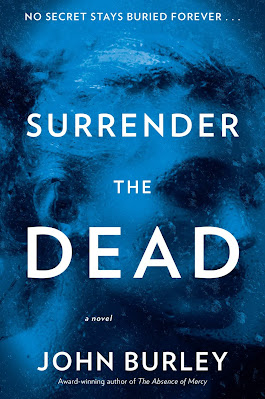 John Burley is the author of The Absence of Mercy, which was honored with the National Black Ribbon Award; The Forgetting Place; and The Quiet Child. He attended medical school in Chicago and completed his emergency medicine residency at University of Maryland Medical Center and the R. Adams Cowley Shock Trauma Center in Baltimore. He continues to serve as an emergency medicine physician in Northern California.

Surrender The Dead is Burley's new work, a chilling and atmospheric psychological thriller about a family and community divided by tragedy, and the dark secrets that will set their town aflame.

Eric Reese returns to her childhood home of Wolf Point, Montana, a town she had sworn she would never set foot in again after graduating high school fifteen years ago. It was an urgent phone call from her father's doctor that forced her to return to a place filled with painful memories and wounds that never healed.

Two decades ago, people in Wolf Point started disappearing without a trace, including Erin's mother. No explanation was ever found, and it's been years since the last disappearance, but the town is still steeped in suspicion and haunted by the ghosts of the missing.

The police reopen their investigation when a body that's been buried in a makeshift grave for years is discovered on the Reece family's land. The evidence against Erin's father is damning, and after such a long time has passed without answers, the community wants justice.

It's up to Erin to clear her father's name, but the path to the truth will force her to unearth long-buried secrets and confront a terrible evil. The thing about Wolf Point is that everyone knows more than they are letting on.

Surrender The Dead is presented in a dual timeline format that moves between the past when the killings happened and fifteen years later as the investigation is being re-opened.

"John Burley has an eye for detail, a feel for story, and a deep sympathy for his characters," says Lou Berney, the award-winning author of November Road.