Books: "24" By The Immortal Willie Mays 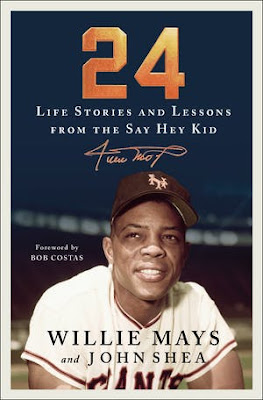 24: Life Stories and Lessons from the Say Hey Kid

By Willie Mays and John Shea; Foreword by Bob Costas

"I was always aware that you play baseball for people who paid money to come see you play. You play for those people. You want to make them smile, have a good time. I would make a hard play look easy and an easy play look hard. Sometimes I'd hesitate, count to three, then I'd get there just in time to make the play. You'd hear the crowd. Sometimes you had to do that in order for people to come back the next day."

This is one of the many pearls of wisdom you will read from Willie Mays, arguably the greatest living ballplayer, in 24, his engaging and reflective memoir. Mays shares the inspirations and influences that guided him on and off the field in 24 chapters, which corresponds with his uniform number. There are quotes from Mays that are presented in bold type to act as guideposts through the story. He offers fans of all ages his lifetime of experience and how he has met challenges with positivity, integrity, and triumph.

"My father said the more you can do, the more you can help your team and the longer you can play," Mays writes. "As far back as I remember, I wanted to do all the things in the game. That's why I looked to Joe DiMaggio. I liked Joe because he could do everything.

Mays is regarded by many as the greatest all-around baseball player due to his superior hitting, defense, and baserunning, dominating all facets of the game as he won two Most Valuable Player Awards, 12 Gold Gloves, a Rookie of the Year award, and a batting title, on his way to becoming a first-ballot Hall of Famer.

"My father said the more you can do, the more you can help your team and the longer you can play," Mays writes. "As far back as I remember, I wanted to do all the things in the game. That's why I looked to Joe DiMaggio. I liked Joe because he could do everything. Hit, play defense, good base runner. I thought that was the way you should play, how I wanted to play. I worked on all parts of the game with my dad, one by one.

A writer would ask about being a five-tool player. I didn't like talking about it. It sounded like bragging. It's not the same as just going out and doing it and letting people see what you can do and let 'em make up their own minds. I felt everything in baseball, I could do. So I set out to be top five in everything. I didn't want to talk about a lot of that stuff as a player. I'll talk about it now."

The 1950s is looked at as the Golden Age of New York baseball, when Mays' New York Giants, the Brooklyn Dodgers and the New York Yankees seemed to meet each other every year in the World Series. Each team had Hall of Fame center fielder, as Mickey Mantle anchored it for the Yankees, Duke Snyder of the Dodgers was so beloved he was known as the Duke of Flatbush, and Mays for the Giants. There are still debates to this day about who was the best of that superb trio.

The Giants lost the 1951 World Series to the Yankees, but won it all in 1954 when the Giants beat the Cleveland Indians, in a series marked by Mays' over-the-shoulder running catch in center field in Game 1. When the Giants moved to San Francisco, he continued his illustrious career out there before returning to New York and finishing his career with the Mets in 1973, on a National League pennant-winning team.

Willie Mays is sixth-all time in home runs with 660, despite playing in two ballparks for most of his career that were anything but hitters' parks, the Polo Grounds in upper Manhattan, and Candlestick Park in San Francisco.

In this excerpt, Mays writes about his philosophy of hitting: "Mays doesn't list his favorite ballparks for hitting because he doesn't believe the ballpark was the biggest factor in succeeding at the plate.

It's not the ballpark. It's the pitcher. I don't care how big a ballpark is. If I get the right pitch. I could hit it out of any ballpark. I focused more on the pitcher than the stadium.

There was no bigger stadium than the Polo Grounds, at least when measuring the distance from the plate to center field. As (Bill) Rigney recalled, 'Boy oh boy. To see him play center field in the Polo Grounds with all that space, and then we came out (to San Francisco), he'd go back on balls at Seals Stadium, and the park was just too small for him. He'd come back after someone hit a home run and say, 'Skipper, I was going to catch that one.'

The Polo Grounds was a big ballpark, but if you could pull it, it was a hitters' ballpark. I could pull the ball, but if you're just a one-way hitter, you're hurting yourself. I moved the ball around. I hit a lot of balls to right-center even then.

It was so big, the bullpens were in the outfield. If a ball bounced in a bullpen, you had to go get it. They were in play, and those pitchers didn't help you out. The clubhouses were in center field, side by side. When the game was over, everybody walked to center field. I don't recall another clubhouse like that.

I had a little head start with the Polo Grounds because I played there when I was with Birmingham. We played two exhibitions at the Polo Grounds and one in Brooklyn against a semipro team called the Bushwicks. I remember hitting the ball pretty good on that trip.

Mays never homered in a game over the center-field wall at the Polo Grounds, but very few hit that far after the stadium's 1923 remodeling. One was Hank Aaron, who did it off the Mets' Jay Hook on June 18, 1962. As chance would have it, it came one day after rookie Lou Brock did it off the Mets' Al Jackson. Brock was a Cub then, tow years before he was dealt to St. Louis, where he became a stolen-base king.

Aaron's teammate in Milwaukee, Joe Adcock, homered to center off the Giants' Jim Hearn on April 29, 1953, one of the years Mays spent in the Army. The only other was Luke Easter of the Negro Leagues' Homestead Grays in a game against the New York Cubans on July 18, 1948, the year Easter's Grays played Mays' Black Barons in the final Negro League World Series.

I could never get it in the center-field bleachers. People didn't want to see you hit it that way because they wanted to see you hit home runs. People were closer to the plate in left field, and they could get balls hit to them out there.

Mays played 889 of his 2,992 career games at Candlestick - the Polo Grounds were a distant second at 399 - and those who saw him regularly insisted he'd have far more than 660 home runs if the weren't challenged by the ballparks he played in, especially Candlestick."