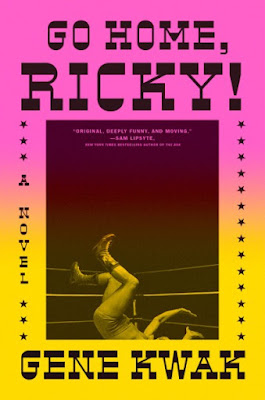 Gene Kwak is a teacher at the University of Nebraska Omaha who has published fiction and nonfiction in print and online in the Los Angeles Review of Books, the Rumpus, Wigleaf, Redivider, Hobart, Electric Literature, and the flash anthology Forward: 21st Century Flash Fiction.

This is Kwak's debut, and this satirical novel is set in the author's hometown of Omaha, Nebraska, and it centers on masculinity and tenderness, fatherhood, and motherhood, as well as racial identiy.

Set in the world of independent wrestling, we encounter Ricky Twohatchet, a.k.a. Richard Powell, who has been on a semi-pro circuit for seven years. He needs one last match before he gets called up to the big leagues.

Most wrestlers play the stereotype, but Ricky believes he comes by his persona honestly, as he is half-white and half-Native American, even though he has never met his father.

On the night of the match in Omaha, something goes wrong in the intricate choreography and it sets him on a course for disaster. He suffers a neck injury, which leaves him in a restrictive brace and a viral video that shows him shouting profanities at his ex-partner, Johnny America.

Injury aside, he is out of the semi-pro wrestling league, and Ricky spirals downward. He sets off to learn about his father, and what he discovers will explode everything he knows about who he is as a man, a friend, a son, a partner, and a wrestler.

Go Home, Ricky! is a Rumpus Book Club pick, and it is one of the most complex books you'll encounter, as it's, at times, witty, heart-wrenching, and always delving into identity.

Gene Kwak writes in this excerpt of what it's like for Ricky entering a fight, told in Ricky's voice, as is the whole book: "Listen to those blue collars. All slab bellies and seed-and-feed hats. Screaming my name in their gut-deep, cig-scorched voices. Heard a stat that the most prone to playing sad sax solos are ag hands. Farmers. Laborers. Ranchers. If I can bring them a little Wednesday-night joy to stave off any self-inflicted sad-sack shit well then, watch me hop the ropes and fly.

I'm pacing in the belly of Sokol Auditorium. Slapping the concrete-walled hallways that work underneath and around and eventually lead to the center-set ring. Sokol has a stage and a balcony, and close to fifteen hundred people can cram in, max. Outside the squared circle, lean one way or the other too hard and you'll feel so many fingertips you might as well be the cutest goat the petting zoo. The exterior of Sokol read all church, with its brick facade and high, arching windows. A stone eagle also presents majestic above the entrance, with an actual cloth-and-dignity American flag waving overhead. Backstage is all business. A couple of rusty folding chairs. Banquet tables. A fruit plate. When we get the call, we emerge from behind a set of heavy purple drapes, a cheap programmable electric sign jerry-rigged to sway above us buzzing our names as the announcer calls us forward and the crowd roars. My name doesn't fit within the word limit, so it always reads RICKY2HAT, confusing the newcomers, because I'm not even wearing a hat.

Ricky Twohatchet is my name, although the government recognizes me as Richard Powell. I run half-Apache and half-Euro mutt: a mix of Irish, Scottish, and Polish. While fifty percent of the blood that courses through my veins is Native, I came out looking like I could model Scandinavian activewear. I'm naturally blond-haired, blue-eyed, with a smile so white it could run a Fortune 500 company. To help the sell, I dye my hair black twice a month at a boutique where the stylist can never shore up the sideburns, but she's a good listener and spends extra time on the complimentary shampoo, so I tip well. I also hit the tanning booth weekly, but that's more for muscle definition. Pops the lats. Lines the delts.

Seven years of making the rounds has led to this moment. From backyard wrestling to bar brawling in Seattle on a bunch of scummy mattresses to middling start-up conferences to this: I'm one level away from being one level away from the big leagues. And tonight is supposed to be my big hurrah. Here, in the belly of Sokol, surrounded by loved ones and onlookers ready to bear witness.

Only I've got to deal with 240 pounds of pissed-off Mexican before the ticker-tape parade.

Picture a preteen boy, sugar-sick off mainlining Mountain Dew, who spends too many hours on a video game and has amped all his character's stats to max to create this Uncanny Valley-looking cartoon version of a man shredded to the high heavens. That's Bojorquez. All brawn. He looks like he had back-alley surgery in Venezuela to fill all major muscle groups with motor oil. I only wish they were filled with fake fluid and weren't solid slabs forged by testosterone and effort.