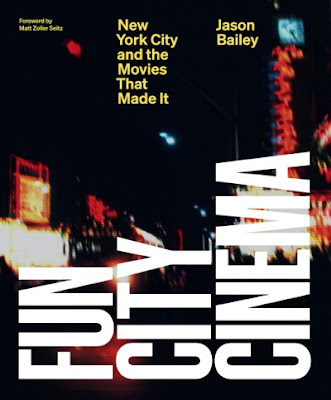 Fun City Cinema: New York City and the Movies That Made It

Jason Bailey is a film critic and historian whose work has appeared in The New York Times, Slate, and The Atlantic. Fun City Cinema is his fifth book, and while it is a treasure trove of movie history, could also double as a history of New York City.

Fun City Cinema documents its rise fall, and resurrection through 100 years of moviemaking, and it is one of the most beautifully produced movie books you will ever own, starting with the distinctive text jumping off the page. As you go through it, you will be wowed by the historic photographs, both scenes from the movies and behind the scenes; production materials, posters, and exclusive interviews with famed directors including Martin Scorsese, Oliver Stone, Greta Gerwig, and Noah Baumbach.

The story is told through the movies themselves, with movie production starting here in the late 1800s, and then when the movie industry shifted west to Hollywood in the 1910s, there still were movies produced here, and the city was still an endless inspiration. While the rest of the country, especially the heartland, could really be Anywhere, USA, if a movie was set in The City, that meant New York. A lot of credit to the city becoming a hotbed for film and TV shooting was Mayor John Lindsey, who in the late 1960s, fulfilled his campaign promise of creating the Mayor's Office of Film, Theatre, and Broadcasting.

Bailey writes of Wall Street, known for Michael Douglas' portrayal of corporate raider Gordon Gekko, "After flirting with the idea of making a drama about the quiz-show scandals - which Robert Redford would eventually direct a few years later - Stone stopped himself. 'I said, 'No, let's go with what I know. I want to go with New York and I want to get back to the mood of those buidings and those people.' (Stanley) Weiser wrote a first draft, Stone a second, and they continued to kick the script back and forth - 'I got more and more excited about it over that period,' he recalls. 'The pace came from Weiser and me because we were New Yorkers. He's funny, and I'm kind of weird in my way. Like he said somewhere, 'Oliver talking on the phone, you could really get a sense of the Gekko dialogue,' because I sometimes get really passionate.'

"(Edward) Pressman was enthusiastic about the subject matter; his stepfather was also a stockbroker. The influence of that older generation, those gentlemen of finance, is pronounced in Stone and Weiser's script, both in the character of Hal Holbrook's stately firm head ('The things he tells young brokers would be things my father would have said,' Stone explains, 'because if you play the market for thirty, forty years, you have to have a philosophy to survive') and in the father-son conflict at the center of the story.

"Bud Fox (Charlie Sheen) is an up-and-comer, a hungry young stockbroker convinced that he can work his way into the big time, and the big money, if he can get into a room with Gordon Gekko (Michael Douglas), one of the most powerful and ruthless figures on the Street. Bud's background is humble; his father (played by Martin Sheen) is a working-class guy, a longtime mechanic for a small, regional airline, and Bud uses a bit of inside information about that airline to make his first impression on Gekko, and to make him some money. Bud's star rises, but the die has been cast - he's clearly willing to bend or break the law to stay in Gekko's good graces, much to the consternation of his blue-collar father...

"Wall Street's production was announced in Variety on February 11, 1987, as well as its April start date. Stone had to work fast - he was attempting to outrun a looming Directors Guild strike - but he likes working fast. 'There's an energy to it,' he says, shrugging. (He extended that energy to post-production, with multiple teams of editors working to get the film ready for its looming December release date.) Throughout the film's writing and production, he employed a team of consultants and technical advisors, from raiders to bankers to prosecutors.

"The company took over a vacant high-rise at 222 Broadway and used it as home base, constructing both Gekko's lair and the offices of Fox's company, Jackson-Steinem. The building's downtown location was a key component. 'All I remember at that time was that I was into location,' Stone recalls. 'Platoon is on location, it's a jungle. It was like a Werner Herzog film. I mean, it was hard work. I was proud of it, and Salvador was extremely difficult, location-wise: no interiors, no studio work there, really. So both films were really tests. New York was nothing for us. What the hell? This is luxury, beautiful locations.' Stone even got permission to shoot on the floor of the Stock Exchange during trading hours. 'We were on it for an hour or two, shooting in full business mode,' he says. 'They loved me because of Platoon. 'Hey, Oliver Stone's on the floor!' It was exciting. Ed Pressman's stepfather had a seat on the Exchange, and a lot of people knew my father from the old days."

Fun City Cinema shows that most movies shot in New York City are a reflection of the time they were filmed in, a virtual kaleidoscope of its rich history.