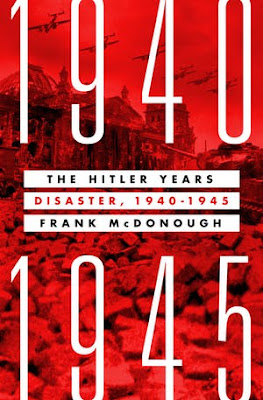 Frank McDonough is an internationally renowned expert on the Third Reich, and has written many books on that era of German history, including Opposition and Resistance in Nazi Germany and The Gestapo. He has appeared on numerous TV programs, including the six-part series, "Nazi Secrets," for National Geographic in 2012 and a ten-part series, The Rise of the Nazi Party, for the Discovery Channel in 2014. He is such a foremost expert on Nazi Germany that the History Channel places his Twitter account, @FXMC1957, in the Top 30 Most Popular Historical Twitter Accounts in the World.

The Hitler Years: Disaster, 1940-1945 is the second volume of a two-part series on the Third Reich under Adolf Hitler. The Hitler Years: Triumph, 1933-1939, which focused on Hitler's rise to power, was released this past May, and click here to read our review of that.

Disaster covers 1940 through 1945, when Germany went from the height of its power in 1940 to comprehensive defeat. It opens right after Germany entered into conflict with Poland, France, and Britain in September 1939. This was borne out of what McDonough argued in Triumph, that Hitler believed that only a war could bring Germany the room it needed to become a genuine superpower.

This was the start of what would turn into World War II, which is the central focus of this densely researched book, complete with maps to illustrate the war's evolution, as well as pictures to document the horror.

McDonough looks at the military progress of the war and the key turning points for Germany, while also showing how Hitler, as well as the Nazi elite, military, and the German people, reacted to the conflict. There is a particular focus on how Germans coped with the ferocious Allied attacks from the air starting in 1942, and the collapse of German society near the end of the war in 1945.

Another focus of Disaster is the Holocaust, in which an estimated six million Jewish people were murdered in what the Nazis terms their 'Final Solution of the Jewish Question.' McDonough reveals how it began with the ghettoization of the German-occupied areas of Poland in 1939-40, built up to mass shootings of Jews in the Soviet Union in late 1941, and the building of purpose-built extermination camps, leading to its most murderous period in 1942, with Operation Reinhard.

Hitler's aim was to create a Greater German Reich of 250 million 'radically pure' Germans, and they would be completely self-sufficient in food and fuel resources. It would be a land-based military and economic superpower that would rival the United States.

An important aspect of Hitler's foreign policy thinking was war, what he termed "the great purifier." He avoided military alliances and signing multilateral treaties, which made it inevitable that Germany moved forward unilaterally before World War II.

In this excerpt, McDonough writes of the aims of Disaster: "It really is a distortion of history to see the Third Reich through the narrow prism of Hitler's mind. It must be understood that Hitler was one important ingredient in the historical events which unfolded, but he was ultimately powerless to control those events.

Adolf Hitler presented the conflict that began in September 1939 as a war of national defence forced upon Germany by 'Jewish wire-pullers' in Britain and France, who were determined to prevent Germany gaining living space. The same argument was used to justify the German attack on the Soviet Union in June 1941: again Hitler presented it as a 'preventive war' to stop the 'Jewish-inspired Bolsheviks' from attacking Germany. The decision to declare war on the United States in December 1941 was portrayed in a similar way. On that occasion 'Jewish wire-pullers' had apparently forced President Roosevelt to join the 'Jewish worldwide conspiracy.' A great majority of Germans accepted Hitler's totally false explanation of why Germany had been forced to go to war.

Two separate military conflicts are at the centre of events from 1940 to 1945 examined in this book. First, the epic German-Soviet War, which ran continuously from the beginning of Operation Barbarossa on 22 June 1941 to the end of the war on 9 May 1945. Four out of every five German soldiers who died in the Second World War were killed by the Red Army. Second, the separate war Germany fought against the British and French empires and the United States. The key events of this struggle were a protracted naval war; the war between Germany and the Anglo-French alliance in 1940, which lasted just six weeks; the German bombing war over Britain, particularly in 1940; the Anglo-American bombing war against Germany from 1942 to 1945; the key battles between Germany and Italy against the Anglo-American Allies in North Africa, in southern Italy, and in the period following the D-Day landings on 6 June 1944, ending in victory for the Allies in Western Europe in May 1945.

My aim here is to show that Germany's war against the Soviet Union was much more brutal and ideologically and economically driven, as well as more destructive and genocidal, than its conflict with the Western Allies, which was conducted mostly according to the Geneva Conventions on war. Germany's wartime conduct was undoubtedly influenced by Nazi racial ideology. Soviet prisoners of war were treated like animals and often starved to death, which Anglo-American POWs were treated well and given Red Cross parcels.

For all of Hitler's boasting, Germany at the start of 1940 remained a medium-sized economic and military power without easily defensible borders, surrounded by a range of potential enemies. As a result, Germany needed to limit the number of its opponents and any military campaign it undertook had to be rapid, because it lacked a sufficient industrial and financial base to sustain a longer conflict against huge economic powers."