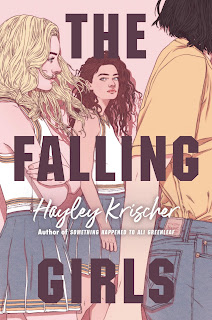 Hayley Krischer is a journalist and author of young adult fiction. Her debut novel, Something Happened to Ali Greenleaf, was on the shortlist in the New York Times, a Book Expo buzz book pick for 2020 and selected for the 2021 Rise: A Feminist Book Project List from the American Library Association. She is a regular contributor to the New York Times and has written about women, teenage girls, and culture for the New York Times Magazine, The Atlantic, Marie Claire, The Rumpus, Lenny Letter, and plenty of other outlets.

Kirschner's keen eye for the real-world experience of young women is evident in her novels for young people. In her new novel, The Falling Girls, she examines the darkness and intensity of teenage female friendships.

Shade and Jadis are as close as best friends can be, and they exist in harmony on the fringe of their high school's social construct. The two girls share everything, from toothbrushes to matching stick-and-poke tattoos.

When Shade, out of nowhere, joins the cheerleading team, Jadis is shocked and horrified. Shade loves the idea of falling into a group of girls and feels fulfilled by the physical challenges of the gymnastics for the cheer routines. She also is irresistibly drawn to the Chloes, the insufferable trio of girls who run the squad, including the enigmatic cheer captain whose dark side is as compelling as it is alarming.

For Jadis, this is the ultimate betrayal. For Shade, the tension between her longtime best friend and her new alluring teammates takes a toll on Shade as she tries to make her own path. She is crushed when one of the Chloes dies under mysterious circumstances and is determined to investigate what really happened.  How far would Jadis go to get her best friend back?

Why I Wrote The Falling Girls - By Hayley Krischner:

What would make a teenager kill her best friend?

This is the question I asked myself when I read about Skylar Neese's murder in Elle magazine a number of years ago. In July 2012, 16-year-old Skylar Neese snuck out her house, got into a car and disappeared. For months police tried to piece together clues. Her two best friends Sheila Eddy and Rachel Shoaf, also 16, consoled Skylar's distraught parents, hung up MISSING signs and posted emotional messages on Facebook like, "Skylar come back...I miss you too much!"

But by January, Rachel Shoaf confessed. She and Sheila had picked up Skylar, drove her out to the woods, and on the count of three, stabbed her to death. When the lead detective asked Rachey ehy, all she would say is: "We just didn't like her." Her answer was staggering, confounding. The story haunted me for years, and so I set out to explore the dark side of female friendships in my new novel.

In The Falling Girls, my main character Shade joins the cheerleading squad and bonds with The Three Chloes, to the dismay of her wild child best friend, Jadis, who sees this as the ultimate betrayal: a friendship breakup. Like most women, I've had my share of friendship breakups. Deborah Tannen, whose book about female friendships I wrote about for The Rumpus, said that a friendship breakup is the most agonizing kind of breakup for women. Why? Because it goes against our biological nature to split from our friends. In fact, one study out of UCLA found that when women are emotionally distressed, our chemical makeup triggers us to turn to our female friends for support. Men, on the other hand, tend to isolate or hole up on their own.

Every teenage girl endures friendship battle scars. It's probably why I identified with the dark comedy Heathers, which came out when I was a senior in high school. Heathers was the antithesis of John Hughes's teem world, where sweet sixteen wished came true, and weirdos dressed in black morphed into cotton candy tropes. Heathers pushed girls to play with uncomfortable feelings. To feel rage against the people they were supposed to be loyal to. That film gave me permission to fantasize about offing my greatest high school frenemy: the girl who stole my boyfriend, who bullied the girls around her, whose cruelty held no bounds. Of course, I wasn't looking to be an actual murderer - but was I dreaming about making her disappear? Hell, yes.

I dug into that rage while writing The Falling Girls. That push-pull you feel when your best friend disappoints you - when she does the very thing you hate. Before cheer, Shade and Jadis shared it all: Same clothes, same toothbrush, same deodorant. When Shade joins the team, it upends not just her friendship with Jadis - but it changes the tighly knit dynamic between The Three Chloes as well.