Books: Personal Stories from Iraq and Afghanistan In "Quagmire" 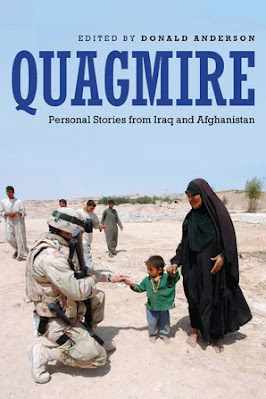 The United States has spent two decades fighting the War on Terror in Afghanistan and Iraq, with the battle beginning after the September 11, 2001 attacks on New York and Washington.

The country just commemorated the 20th anniversary of the 9/11 attacks, which precipitated the two stages of war. The United States attacked Afghanistan in October 2001, while the Iraq war started in March of 2003.

The war in Afghanistan bended in August when the U.S. Army pulled out of the country, and the Taliban took over, just as they had before 9/11, with the fall of Kabul on August 15. In the weeks that followed, there were horrendous images of people trying to evacuate, and 13 U.S. service members being killed in a suicide bombing

The country read about those heroes who lost their lives that day, another incalculable loss from two wars that had mixed results.

In the new book, Quagmire, you will find a range of voices who took part in the war - men and women, military and civilian - and their recollections of the war from the viewpoints of the homeland, the combat zone, and the aftermath of the battle.

It is edited by Donald Anderson, the author of Gathering Noise from My Life: A Campuflaged Memoir, and the editor of When War Becomes Personal: Soldiers' Accounts from the Civil War to Iraq. He also is a professor of English and a writer in residence at the U.S. Air Force Academy, where he edits War, Literature & the Arts: An International Journal of the Humanities.

The personal responses to the war in Iraq and Afghanistan that are featured in Quagmire have been selected from War, Literature & the Arts, to mark the thirtieth anniversary of its inaugural publication.

Anderson writes, "The responses, written over the period of the last fifteen years, mirror, approximately, the lengths of these two Middle Eastern conflicts, and demonstrate, I believe, the fixed aftermath of war, the degreed ripples that extend beyond soldiers to families and friends, lovers, hometowns, even pets. For citizens, there in an obligation - is there not? -as (Pablo) Neruda advised, to 'Come and see the blood in the streets.' To ignore what we do in war and what war does to us is to move willfully toward ignorance and pretense. To scorn such reminders ceaselessly imperils ourselves, our communities, and our nation."

On the importance of these first-person essays, Anderson writes in the Prologue, "As regards war literature, it feels defensible to suggest that we list more toward the authority of experience than we do to the authority of imagination. We accept, don't we, that The Red Badge of Courage provides insight into the American Civil War even though Stephen Crane himself did not participate in that war? But does Tim O'Brien's service in Vietnam add weight to The Things They Carried? Or Elliott Ackerman's service to his accounts of Iraq? Benjamin Busch's and Brian Turner's service certainly reinforces the accuracy and legitimacy of their Iraq War memoirs, does it not? Of course all writers draw on the power of imagination when they write their best. So the effect's blurry. Nonetheless, there is a kind of insider/outsider phenomenon at work when we encounter war literature. When it is an insider writing we perk up as we do in the move theater seeing 'Based on a True Story' scroll across the screen. I admit I'm a sucker for it."

In the Foreword, Philip Beidler, a Vietnam War veteran, compares the essays on the complexity of these conflicts to what he experienced, "In contrast to even this prolonged military train wreck, what I get out of the Quagmire narratives if that there never really was anything resembling a mission to begin with and that the longer we stayed in Iraq and Afghanistan the more bizarre and incoherent it all became - no matter how or where one was deployed. And that, I must say, is to me the most concentrated composite effect of the essays: that there were nearly as many wars going as there were different participants in different situations over a nearly interminable period of years. And, if anything, the differences themselves were breathtaking, again even for a Vietnam War veteran who thought he had seen the most of it. Here a roadblock, erupting into the latest shooting up of a carful of civilians, seemed to be an everyday occurrence. With the flick of a cellphone an incredibly powerful IED could turn any patrol into a bloodbath. Anyone on the street could be a suicide bomber."

Beidler also pointed out that the title of this book, Quagmire, derived from a term used to describe Vietnam.

Whatever one thinks of these wars, one can't deny the heroism of the soldiers who fought it, and that's what makes this book a worthwhile read, especially at this moment when it has been back in the headlines.