Books: The First Family Examined In "The Bidens" By Ben Schreckinger 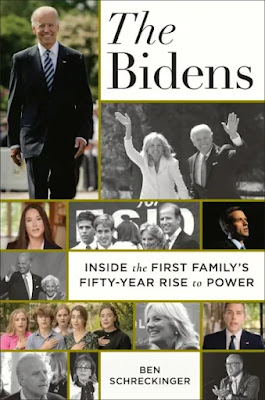 The Bidens: Inside the First Family's Fifty-Year Rise to Power

Ben Schreckinger, a national political correspondent for Politico, has written the definitive account of President Joe Biden's career, and how it certainly became a family business of sorts.

When Biden won the presidency last November, the United States wasn't just getting the former Vice President, they were getting the tight-knit Biden family - his wife Jill, his siblings, children, in-laws, and beyond. They are certain to play a defining role, just as they did in his nearly 40 years as a Senator from Delaware, as well as the second-in-command to President Barack Obama.

The best way to understand what makes Joe Biden tick, his values, fears, and motives, is to understand his family, their place in the Delaware pecking order, their dodgy business deals, and their personal triumphs and struggles.

Schreckinger likens them to another Irish Catholic political dynasty, the Kennedys, because of their good looks, dynastic ambitions, and serious political problems.

This deeply researched book includes a look at Joe Biden's childhood, which the President references endlessly; his 1972 upset victory when he became the youngest person to enter the Senate, which was engineered by his sister Valerie, and the car accident that killed his wife and infant daughter; Joe's early years in the Senate and his role in creating the "Delaware Way" of conducting politics; and the Biden brothers' business escapades, including the 1970s rock club rivalry that pitted Jim Biden against Jill Biden's first husband and ended in a banking scandal.

There is also a look at recent scandals involving Biden's son Hunter and his business dealings in Ukraine. Schreckinger provides new evidence that sheds light on whether his laptop - known as "the laptop from hell," which Steve Bannon gave the New York Post to report on - is authentic.

Schreckinger writes of his own reporting on Biden ahead of the 2020 presidential campaign: "In the summer of 2019 I set out a vague notion of profiling Hunter Biden, who was then beginning to attract media attention. My initial research quickly led me instead to a more investigative story for Politico Magazine about Hunter's business ventures, those of his uncle Jim Biden, and the ways in which they intersected with Joe Biden's political career and public office.

There are more fun ways to spend a summer than digging through documents and piecing together old newspaper clippings in order to assemble a story about a sensitive, contentious topic, and I assumed this first piece on the Biden family would also be my last.

But between the time I started working on that piece and the time it was published, new allegations from Jim's former business partners had emerged in a lawsuit in Tennessee that fit the pattern I had documented. From there, I received a steady trickle of new tips and leads related, primarily, to the business ventures and finances of Biden's relatives.

Soon, Donald Trump's ham-handed efforts to pressure Ukrainian authorities into investigating the Bidens came to light and the topic of the family's business dealings suddenly became central to a presidential impeachment. Then, Joe staged a dramatic comeback in the Democratic primary and won the presidency, even as Trump sought to make Hunter an issue in the race.

The Bidens, and the efforts of Trump's allies to sully them, became my de facto beat.

We live in an age of distrust and of coordinated campaigns to manipulate public opinion. Readers have every right to wonder whether an extended inquiry into the Biden family, emphasizing its finances, is just some instrument of a broader effort to create a political narrative. After all, as this book covers, there really was a conspiracy against the Bidens, or several loosely aligned conspiracies.

When I started to publish articles about the Bidens, I received a fair number of offers of professional opposition research. Mostly, the research I was offered amounted to compilations of old, unflattering news articles. These could provide useful context but were hardly the stuff of a masterful information campaign.

Instead, almost all my reporting resulted from my own research or tips from regular people. One article did result primarily from a piece of professional opposition research, though even that required weeks' worth of additional reporting.

At times, I struggled to reconcile the folksy image of the Bidens that had become familiar to me as a news consumer and young journalist during the Obama era with the messier portrait that emerged from my recent reporting for Politico.

The book, which grows out of that reporting, represents my attempt to grapple with the Bidens' story - an epic saga of an American political family - in its entirety. To understand any world leader it is helpful to understand their family, but I believe that in Joe Biden's case it is more crucial than in most.

Because both the campaign controversies and my own reporting dealt with the Bidens' finances, this telling of their story includes a special emphasis on that subject and the ethical questions raised by it. Journalists have produced reams of excellent reporting about the ethical problems posed by the Trumps' finances, which in many cases were more direct, more clear-cut, and on a grander scale than the issues raised. This book does not deal with that subject in any depth other than to note it undermined Trump's ability to make a convincing case against his opponent.

At the highest levels, even the appearance of a conflict of interest or of special treatment threatens to undermine public faith in government. Did any of the Bidens' activities go further and create undue influence, allow hostile actors to compromise a member of the first family, or otherwise cross ethical lines? Joe has maintained that he has never discussed his relatives' business dealings with them, and several of those relatives have repeatedly denied allegations that they used their family connections for profit...

The Bidens' story isn't over, but I hope that this early attempt at a holistic telling of that story will help people understand events from a common set of facts, even if it inevitably remains incomplete and open to multiple interpretations."