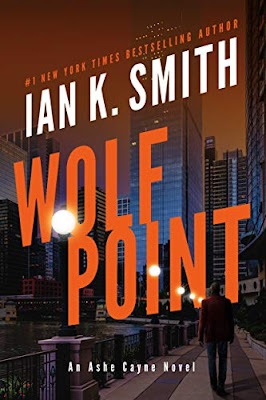 Ian K. Smith is a former co-host of the Emmy award-winning syndicated daytime talk show, "The Doctors," and he also served as the medical/diet expert for six seasons on VH1's "Celebrity Fit Club." He also is renowned for his #1 New York Times bestselling health books, including SHRED, The Revolutionary Diet, The Clean 20, Clean and Lean, and his most recent book, FAST BURN.

In addition, Smith is an accomplished thriller writer, starting with his The Blackbird Papers, winner of the 2005 BCALA fiction Honor Book Award; The Ancient Nine, and The Unspoken, which launched the Ashe Cayne series in 2010.

Wolf Point is the sequel to The Unspoken, and it is set in Smith's hometown of Chicago and features private investigator Ashe Cayne, a Black man determined to find justice and resolution for victims at any cost.

Smith did extensive research of Chicago's political infrastructure and criminal justice system, making his fiction read like it's ripped from the headlines. He was intrigued by a local story from 2009, in which Michael Scott, a well-known and beloved public servant, went missing, and his body was discovered at Wolf Point, an isolated stretch of Chicago's waterfront property. After a lengthy investigation, it was ruled a suicide. Conspiracy theories abounded, and many locals felt that Scott was a victim of a political murder that was carried out and covered up by shadowy forces loyal to Mayor Daley's administration.

Ashe Cayne's new case is inspired by this true-life tale. Walter Griffin, a prominent Black Chicagoan and the mayor's go-to guy has been found dead at Wolf Point, and the authorities are certain he killed himself. Griffin's distraught family believes there's more to the story and hires Cayne to investigate. Cayne has to dive deep into the dark underbelly of a city rotting with corruption, racial tensions, and sketchy backroom deals. The streets of Chicago, where it's every man for himself, make everyone a suspect.

Smith, who fitness-trained at Chicago's Police Academy and worked closely with a local detective, offers an insider's perspective on the local crime milieu and brings both the grandness and the grit of the Windy City to life in this novel. 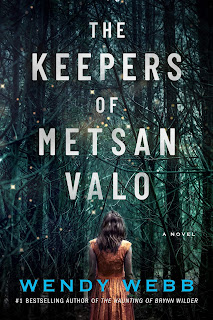 The Keepers of Metsan Valo

Wendy Webb is the #1 Amazon Charts bestselling and multiple award-winning author of six novels of gothic suspense, including The Haunting of Brynn Wilder; Daughters of the Lake; The Vanishing; The Fate of Mercy Alban; The Tale of Halcyon Crane; and The End of Temperance Dare, which has been optioned for both film and television. Wendy has been dubbed "Queen of the Northern Gothic" by reviewers because all of her stories are set on the windswept, rocky shores of the Great Lakes.

In her new novel, The Keepers of Metsan Valo, Webb infuses her latest story with folklore from her own family's Finnish history. When Anni's beloved grandmother passes away, she, her twin brother, and the rest of their family gather at Metsan Valo, the family estate on the shores of Lake Superior, for the reading of the will.

Not too long after Anni arrives, frightening and unexplainable things start happening. Strange visions, whispers in the walls, and unnerving nightmares plague her first days and nights, compounding her grief and rattling her spirit.

Anni fears that returning to Metsan Valo has invited less of a welcoming and more of a warning. Once the final wishes of Anni's grandmother are revealed in a heated reading of the will, family tensions reach a fever pitch.

However, when tragedy strikes the family for a second time, Anni and her family set out to unspool a mystery that spans centuries - one that is relentless in its desire to be discovered. 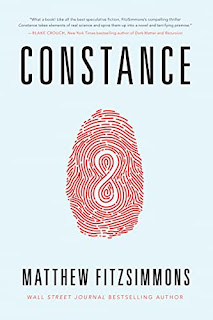 Constance is set in Virginia and in Washington, DC, where FitzSimmons resides. It is set 20 years in the future, and the fcus is on Constance "Con" D'Arcy and the unusual premise of detective and victim being one and the same.

In this world, technology allows the very wealthy to cheat death by buying their own clones (for $20 million) and regularly uploading their consciousnesses. Con is broke, but she was gifted a clone by her late aunt, who was instrumental in the program's development.

After a routine monthly upload, which is stored for the inevitable transition, something goes wrong. When Con wakes up in the clinic, it's eighteen months later, and her recent memories are missing. Her original, she is told, is dead. If that's true, what does that make her?

Con, faced with this horrifying resolution, finds herself investigating her own murder - with no resources, no recollections to use as guidance, and no trustworthy allies. With determination, she retraces the steps of the original to find out why she died and keep it from happening again.

FitzSimmons consulted with an expert at the cutting edge of neuropsychology research at Johns Hopkins University to ground the science fiction aspects with real-life details of what could be possible in the near future. 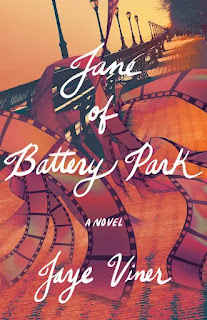 Jaye Viner was born in Kobe, Japab, and raised in the Great Plains, leading her to explore other cultures both near and far. Viner has an MFA and MA from the University of Nebraska and has plenty of nonprofessional experience, most studying the art of conveying meaning to an audience of readers.

In the new novel, Jane of Battery Park, Viner focuses on a Los Angeles nurse, Jane, who grew up in a Christian cult that puts celebrities on trial for their sins. Daniel is a has-been actor whose career ended when family members of the cult nearly killed him for flirting with her. Eight years after a romantic meet-cute in Battery Park, both are in search of someone that can fill the gap they imagine that the other could have filled if given the chance.

Jane compulsively goes on dates with every self-professed expert in art, music, and food hoping they will teach her the nuances of the culture she couldn't access in her youth.

Daniel looks for a girlfriend who will accept the disabilities left from the cult attack. A loving woman will prove to Daniel's blockbuster star brother, Steve, that he's capable of a supporting role in Steve's upcoming movie and relaunching Daniel's career.

When they are reunited by an unexpectedly chance encounter, Jane and Daniel not only see another chance at the love they lost, but an opportunity to create the lives they've always wanted. The only question is whether their families will let them.

Viner writes in this excerpt: "First, she stopped at Taco Bell for lunch, then she drove through Starbucks for what turned out to be a poorly blended Frappuccino. She jabbed at the ice chunks as she drove. Drivers honked their horns and passed her, furious for no apparent reason. There was that billboard again, the woman who looked like Jane gazing at her perfect sleeping child. She made Jane want to throw things. She cultivated fantasies of objects flying end over end through the air, splatting, thudding, crashing.

At the gas station off the hospital exit, she stopped and bought three fistfuls of little bottles of Wild Turkey whiskey. The gas station guy asked if she wouldn't rather just buy a pint. Jane laughed in his face. 'A pint? A pint! I'm going to work, you moron.'

He gave her a look; she felt the need to clarify.

The gas station attendant's right hand moved beneath the counter like he was reaching for the alarm.

'Don't you hate that billboard? Someone should complain. That's not how it is you know, being a parent.'

The guy pretended he didn't know what she was talking about.

Jane drove the rest of the way to the hospital with the bottles in her lap, one hand keeping them in place, one hand steering. One or two accidentally found their way into her purse as she parked. Jane patted the knobs of their bottoms poking against the canvas as she walked across the parking garage. One never knew when some lowlife or the gas station guy could break into your car, and Jane didn't want all her little bottles to disappear without her.

Alma waited at the elevator. 'Where the frack have you been?' Her hair was a tangled mass amplifying every movement of her head. 'I've been calling you.' A rush of tears flooded her eyes. She choked on a sob.

'I'm here now, relax.' Jane sensed a nervous anticipation in the air, a conspiring of the universe. It occurred to her that only men had the power to make Alma this upset.

'I've done something terrible. You have to help me make it right.'"