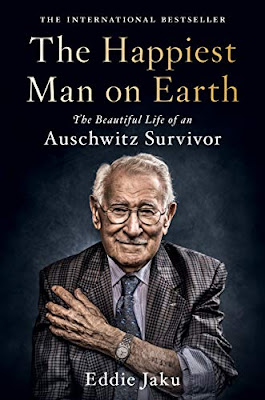 The Happiest Man on Earth: The Beautiful Life of an Auschwitz Survivor

On Tuesday, the world was saddened to learn that Holocaust survivor Eddie Jaku passed away in Australia at the age of 101. He is renowned around the world for his memoir, The Happiest Man on Earth, which was a bestseller in Australia last year and was released in the United States this past May.

"I have lived for a century, and I know what it is to stare evil in the face," said Jaku, who experienced the worst of humanity. He spent seven years in concentration camps, and inspired the world with his hopeful message that he always found a reason to smile and live each day to the fullest. His 2019 Ted Talk, which drew over 320,000 views, inspired his heartfelt memoir.

Jaku was born Abraham Jakubowicz in Leipzig, Germany in 1920, into a Jewish family. As the country was taken over by Adolf Hitler in the early 1930s, they could sense that things were going to turn horrific for Jewish people, and when Eddie was 13, his family acquired false papers and sent him to school nine hours away in order to keep him safe.

For the next six years, Jaku lived under an assumed name, and he then decided to return home for a surprise visit. He was shocked t discover that the house was empty, his family vanished, and only the dog was left behind.

The next day, November 9, 1938, was Kristallnacht, the Night of Broken Glass, which was a day of extreme violence against Jewish people throughout Germany.  Eddie was beaten by SS thugs, arrested, and thrown into a concentration camp with thousands of other Jews across the country.

Jaku spent the next seven years confronting unimaginable horrors in Buchenwald, Auschwitz, and ultimately on a forced death arch through the Third Reich's final days. He was rescued by Allied soldiers at the end of World War II, and even though the Nazis took everything from him, they did not break his spirit.

After surviving unthinkable terror, Eddie was grateful for the precious gift he received and made a promise to smile every day to honor the six million Jewish people killed by Hitler. He kept silent for decades about his experiences, but eventually felt compelled to share his story and a deep responsibility to speak out and educate on how dangerous hate can be.

Eddie moved to Australia with his family in 1950, and lived there until the end of his life with his wife of 74 years, Flore. They had two sons, grandchildren, and great grandchildren. He volunteered at the Sydney Jewish Museum since its inception in 1992, and was awarded the Medal of the Order of Australia (OAM).

The Happiest Man on Earth is Kaku's tribute to those who were lost by telling his story, sharing his knowledge, and how he led such a beautiful. rewarding life. It is one of the most inspiring, heartfelt, and emotional works you will ever read.