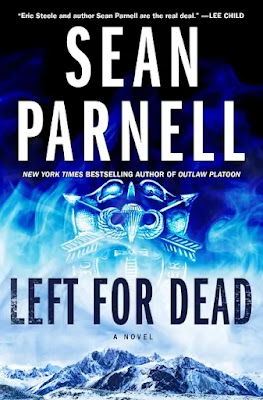 Sean Parnell is a retired U.S. Army Infantry captain who served in some of the heaviest combat zones in the Afghan War. He is the cofounder of the American Warrior Initiative, a charity that honors our veterans, and he vividly recalls his battles during his leadership presentations for the nation's most successful corporations. Parnell is a frequent television guest on Fox and CNN, a candidate for Senate in Pennsylvania, and he lives with his three children near Pittsburgh.

Parnell is also an author of his memoir Outlaw Platoon and the Eric Steele novels Man of War, All Out War, and One True Patriot.

Left for Dead is the latest Eric Steele novel, and we find the special operative battling a renegade group of bioterrorists armed with a devastating virus.

Doctor Ai Liang is on a remote mountaintop and about to risk everything and defy the Chinese Communist Party. She is part of a team who have created a terrifying new coronavirus called C-62, and it is deadlier than COVID-19, capable of killing a person in twenty minutes.

Dr. Liang's conscience tells her she must destroy the deadly bioweapon before it devastates millions, but before she can execute the heroic plan, mysterious commandos swarm the lab, kill everyone in sight, and take off with the C-62 virus.

While this is happening, Eric Steele is on a cleanup mission, ready to exact revenge on the group responsible for killing numerous alphas and forcing the Program to disband. After justice is served, Steele can turn his thoughts to other pressing matters, including his long lost father and his estranged girlfriend, Meg Harden. However, when it comes out that the CCP plans to attack United States forces, the President decides to revive the Program to deal with this new threat.

Steele is back in action, and soon discovers that the supposed CCP attack is related to a much more complex plot involving a fanatical Chinese Imperialist group, plus the stolen C-62 bioweapon. Steele and his team must find out who the real threat is and stop them before they can unleash another pandemic in the form of the deadly C-62 virus on the entire world.

In this excerpt, Parnell writes of the night commandos came to Dr. Liang's lab: "The helicopters arrived at midnight, and the men they carried killed everyone they met.

There were three of the machines, black and hulking but sleek as sharks, all emblazoned with the red stars of the Chinese Communist Party's People Liberation Army. They were Harbin Z-20s, heavily armed, capable of three hundred knots airspeed at treetop level and each hauling a dozen assaulters. They looked much like U.S. Army UH-60 Black Hawks, but they were not cheap knockoffs. Their rotor systems had been expertly cloned from a crashed American stealth helicopter, gifted to Beijing by the Pakistanis after U.S. Navy SEALs had terminated Osama bin Laden.

The Harbin Z-20s were very quiet. No one heard them coming at Toqui 13, the most secret biological warfare laboratory in all of China.

The lab was a Level V facility drilled into the summit of a wind-scarred butte that resembled Devils Tower in Wyoming. It was located in the absolute nowhere of the north central Chinese badlands, ten kilometers from the Mongolian border. You couldn't just stumble upon it, and if you did you'd be shot on the spot and no one would find your corpse. Toqui 13, whose name meant 'Spearhead' in Mandarin, had been built to harvest only one thing: a genetically enhanced corona virus called Gantu-62 that could kill a Notre Dame linebacker in fifteen minutes.

Dr. Ai Liang, a full colonel in the People's Army, was the laboratory's director, and up until recently she'd been fervently dedicated to the Chinese Communist Party. The daughter of a distinguished couple of the Cultural Revolution, she'd already become a star of the Chinese Communist Youth League at age sixteen and had graduated with honors from Changchun University of Science and Technology while simultaneously pursuing her military career. Mao Zedong was her God.

But three weeks ago something had happened that had flipped a switch in Dr. Liang's head. Her research assistant, Second Lieutenant Chang Wu - a handsome young man with a lovely wife and three precious girls in Shanghai - had slipped on a spill of lubricant from an air conditioner and had smashed the glass of an incubator with his elbow. The shards had sliced open his Military Oriented Protective Posture suit, as well as his flesh.

Lieutenant Wu instantly knew what was going to happen, and so did his mentor. Together, they had tested Gantu-62 on laboratory animals - first mice, then rabbits, and finally rhesus macaque monkeys. The viral storm had swept through Wu's bloodstream in minutes, and his immunological response was explosive. It was like an Ebola reaction in hyper speed. Helpless and horrified, Dr. Liang had watched the poor boy wretch up his own intestines, drown in his own blood, and choke to death on the laboratory floor.

Two days prior to this evening, she had finally emerged from three weeks in quarantine isolation, where she'd examined her life and its purpose and had wept until she had no tears left. She had firmly concluded that there should be no Level V biowarfare laboratories, or anything like Gantu-62, anywhere in the world.

Tonight she was going to shut the whole thing down..."