Books: The Race To A Covid-19 Vaccine In "The First Shots" By Brendan Borrell 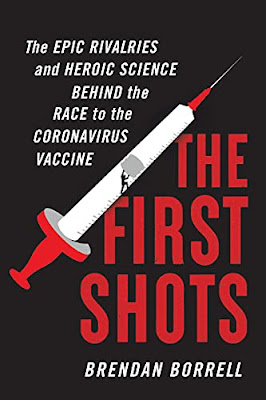 The First Shots: The Epic Rivalries and Heroic Science Behind the Race to the Coronavirus Vaccine

Brendan Borrell is an Outside magazine correspondent who has written on science, health, and business for The Atlantic, Bloomberg Businessweek, National Geographic, Wired, and the New York Times.

The First Shots is Borrell's first book, and it documents the worldwide race to create a vaccine for Covid-19. He used his high-level access to put together this richly-detailed story about the scientists, billionaire entrepreneurs, and chaotic political players who shaped the past 18 months, and all the fear, resolve, and triumph around the pandemic.

Vaccines usually take years to reach people, but the ones to combat Covid-19 took a matter of months. It only took a matter of days after obtaining the gene sequence of the new coronavirus for scientists to develop prototype vaccine. This was only possible because of scientists who worked for decades, including on the new mRNA vaccines, whose history stretches back to the 1980s This is what the Pfizer and Moderna ones are composed of, and in Pfizer's case, it took just 11 months from sequence to Pfizer's emergency authorization, making it by far the fastest vaccine in history. Pfizer and Moderna expect to earn $50 billion from their Covid vaccines, exceeding any other drug or vaccine in their pipelines.

Messenger RNA, or mRNA, is an information molecule that the body uses to carry out the instructions our DNA genome has written. When we acquire a particular protein, like insulin, our cells copy the gene for that protein onto mRNA, which then becomes the template for that protein. It wasn't until early 2020 that scientists figured out the technique to put it to use in a vaccine, delivering the spike protein of the coronavirus, which explains why Pfizer and Moderna's vaccines were developed so rapidly.

The scientists who made it possible include Katalin Kariko, a Hungarian-born scientist who toiled for years to have a major breakthrough with mRNA, but only received well-deserved accolades in the last year; Barney Graham, who spent years working on this obscure, but important, respiratory virus in his work at the National Institutes of Health, and that gave him insights into how to safely design a vaccine for this new coronavirus; and Kizzmekia Corbett, who lead Graham's animal research and has become a powerful ambassador promoting the vaccines to hesitant members of the Black community.

What made it possible was Operation Warp Speed, which was the brainchild of Robert Kadlec, an Air Force doctor who ran an obscure wing of the Health Department, and Peter Marks, of the FDA. When the pandemic spread around the United States in March and April 2020, the vaccine timeline of 12 to 18 months, essentially the timeline for life to return to normal, was not feasible. Operation Warp Speed worked by creating a coordinated vaccine effort, selecting the to candidates to give financial backing to and funneling them into clinical trials faster than they might have on their own; and by manufacturing vaccine before any of these candidates proved their effectiveness.

In order to make it work and avoid White House interference, especially from President Donald J. Trump, the architects of Operation Warp Speed established it as a joint program between the health department and the military. This was especially necessary after Trump pushed aside Secretary of Health and Human Services Alex Azar, who oversaw nearly every agency key to the pandemic response, early in the outbreak. Azar found his way back to influence through Operation Warp Speed, although he had trouble selling the vaccines to Trump, starting with the purchase of 300 million doses of the AstraZeneca vaccine for Americans. Trump griped that, because it was a British, Prime Minister Boris Johnson would never let him hear the end of it. After the two-billion dollar Pfizer agreement was signed, Trump felt it was a bad deal, not realizing that the US only had to pay if the vaccine was approved.

The First Shots is currently under development for an HBO limited series with superstar director and producer Adam McKay, who is known for Succession, Vice, and The Big Short.

A Conversation With Brendan Borrell (provided by Mariner Books):

When did you know you wanted to write The First Shots? I started working on my book proposal in early May 2020, and it was becoming clear that a vaccine was the only way we were going to end the pandemic. Even before the official launch of Operation Warp Speed, I could see that this was the coronavirus story that I had to follow with its wide-ranging implications for science, society, and, of course, the entire geopolitical landscape. I knew that a lot of other authors would be writing about what went wrong with the U.S. pandemic response, and, while I certainly don't shy away from that in my book, I wanted to highlight the scientists and public servants who were dedicated to doing right by the American public.

What do you think will make The First Shots stand out to readers? While Trump has held Warp Speed up as a central part of his legacy, the team who first came up with the plan had little love for the president. My goal was to focus on these insiders who were trying to do the right thing, and who ultimately contributed to making Operation Warp Speed successful against all odds. My book lays out the full story of how this incredible thing happened and how they worked to keep the dysfunctional White House at arm's length.

What did you learn about the science that allowed the coronavirus vaccines to be designed and rolled out in record time? It turns out that making a vaccine prototype is fast, proving that it works and making sure it is safe is the hard part. Scientists had a prototype vaccine within days of obtaining the gene sequence of the new coronavirus. That's absolutely true, but it was only possible because of decades of dedicated work by scientists who most of us had never heard of. One of the heroes of this story is Barney Graham, a researcher at the National Institutes of Health, who spent years working on this obscure, but important respiratory virus, which gave him critical insights into how to safely design a vaccine for the new coronavirus. Then, there are all the quirky scientists who spent their lives figuring out, say, the best way to insert genes into caterpillar cells so that they could grow the virus proteins used in certain vaccines. Even the newfangled mRNA vaccines have a long history stretching back into the 1980s, but that technology had reached a point of maturity at just the right moment that companies like Moderna and Pfizer could capitalize on it.

Who are some of the scientific heroes, well- and lesser-known, behind the vaccine race? The Moderna and Pfizer vaccines that most of us have received here in the U.S. wouldn't be possible without the mRNA breakthrough developed by Katalin Kariko, a long-suffering Hungarian-born scientist who has only gotten the credit she deserves in the last year. Barney Graham at the NIH didn't work alone, however either. Leading his animal research was a woman names Kizzmekia Corbett, who is not just an inspiring scientist but has also become a powerful ambassador encouraging hesitant members of the Black community to get their shots.

You deliver some great windows onto White House palace intrigue in the midst of the vaccine race. Tell us about one incident you consider pivotal. One of the central dramas in the book comes from the tension between the Trump White House and the teams working in the health department. That battle first erupts in February 2020, when Secretary Alex Azar takes the heat for some of the early mistakes in the pandemic response and gets ousted as the chairman of the Coronavirus Task Force. Over the next couple months, Azar is absolutely desperate to regain the power which he feels is his due, and he eventually sees that will come from the vaccines. When members of his team propose Operation Warp Speed, he's the one who takes it to Jared Kushner, who basically gives his team the green light and helps keep the rest of the White House away from it.