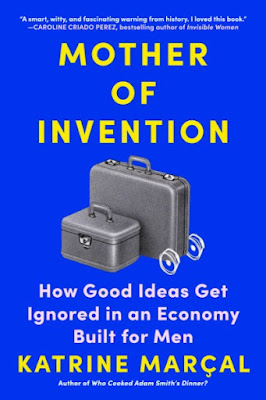 Mother of Invention: How Good Ideas Get Ignored in an Economy Built for Men

Katrine Marcal is a Swedish writer, journalist and correspondent for the Swedish daily newspaper Dagwens Nyheter. Her first book was Who Cooked Adam Smith's Dinner?, which was shortlisted for the August Prize and won the Lagercrantzen award.

Marcal's newest book, Mother of Invention, is an illuminating and maddening examination of how gender bias has skewed business, innovation, technology, and, ultimately, history. It is told through a feminist lens.

The starting off point for this unique look at the world through an economic lens is the rolling suitcase. (It is on the striking cover as well) The wheel was invented five thousand years ago, and the suitcase was created in the nineteenth century, but it wasn't until the 1970s that they were put together. For Marcal, the answer is shocking and simple, because "real men" carried their bags, no matter how heavy they were.

Other examples Marcal examines are electric cars to bra seamstresses to tech billionaires to show how gender bias holds us back and stifles the economy. It can delay innovations by as many as hundreds of years, and distorts our view of history.

When there is a discussion on the Iron Age or the Bronze Age, people should also talk about the "Ceramic Age" or the "Flax Age," since they were just as important innovations. Mercal contends that because they're inventions associated with women, they are not given the same weight of other technologies.

Marcal's overriding message for the global economy is that, if we upend our biases, we can unleash our full potential.

In this excerpt, Marcal writes about the rolling suitcase and how it was as much about patents than actually creating it: "Historians long considered the world's first wheel to have been made in Mesopotamia. It was a round potter's wheel, which is to say it was not used for transport. But today some scholars believe that miners were carting copper ores through tunnels in the Carpathian Mountains long before the Mesopotamians started throwing pots on circular discs. The world's oldest wheel still in existence is five thousand years old. It was unearthed in Slovenia, about twelve miles south of Ljubljana. In other words, the technology that Bernard Sadow realized he could apply to his suitcase problem was at least five millennia old.

The patent for his invention came two years later, in 1972. In his application, he wrote, 'The luggage actually glides...any person, regardless of size, strength, or age, can easily pull the luggage along without effort or strain.'

Similar patents for suitcases on wheels did in fact already exist, but Bernard Sadow wasn't aware of this when the idea first occurred to him. He was the first person to turn the idea into a commercially successful product, and is therefore considered the father of the wheeled suitcase; but why it took five thousand years to reach this point is more difficult to explain.

The wheeled suitcase has become an archetypal example of how innovation can be a very slow-footed thing. The 'blindingly obvious' can stare us expectantly in the face for an eternity before it actually occurs to us to make something of it.

Robert Shiller, a winner of the Nobel Prize for Economics, has suggested that many inventions take time to catch on precisely because a good idea alone won't cut it. Society at large must also recognize the usefulness of the idea. The market doesn't always know what's best for itself, and in this particular case, people just didn't see the point of wheels on suitcases. Sadow presented his product to buyers from almost all of the United States' major department stores, and initially all of them rejected it.

It wasn't that they thought the idea of a suitcase on wheels was a bad one. They just didn't think anyone would want to buy the product. A suitcase was for carrying, not for trailing around on wheels.

'Everybody I took it to threw me out,' he would later recount. 'They thought I was crazy.'

Eventually the new product came to the attention of Jerry Levy, vice president at department-store chain Macy's. He towed it around in his office, then called in the buyer who had originally rejected it and gave him the order to buy it. This proved a wise move. Soon Macy's was marketing the new suitcase using the very wording from Sadow's patent application: 'The Luggage That Glides.' And nowadays it is of course impossible to imagine a world in which suitcases on wheels are anything but standard.

Robert Shiller argues that this is easy to say in hindsight. He notes that inventor John Allan May had in fact attempted to sell a suitcase on wheels some four decades before Sadow. May had notices that over the course of human history, humanity had put wheels on increasingly diverse objects: cannons, carts, wheelbarrows - essentially anything that could be classed as heavy. A suitcase on wheels was just a natural continuation of that logic. Why not 'make full use of the wheel?' he asked, when he presented his idea to more than one hundred different groups of people. But no one took him seriously. In fact, they laughed in his face. Make full use of the wheel? Why not just fit people with wheels? Then we could roll! Practical, no?

John Allan May never did sell any suitcases.

Economista tend to work from an assumption that humans act rationally. But in reality we overestimate ourselves, often taking it as given that all the good inventions have already been made. By extension, we tend to reject new ideas that we perceive as being too 'simple' or 'obvious.' We imagine that the technology we have at our fingertips is the best currently possible, which is a reasonable assumption in our everyday lives. If refrigerators open from the front and cars are maneuvered by a steering wheel, there must be a good reason for it, we think. This, however, is the very thinking that makes us miss obvious things like putting wheels on suitcases."