Books: A Definitive Look At "The Master," Roger Federer 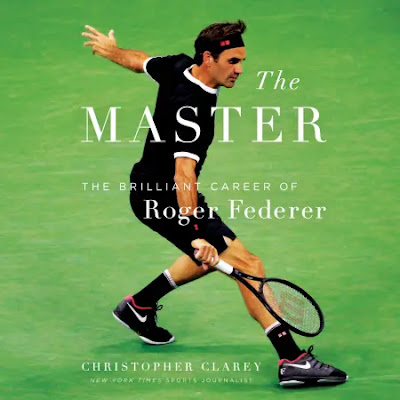 The Master: The Long Run and Beautiful Game of Roger Federer

Christopher Clarey, then lead tennis writer for the New York Times,as covered Roger Federer since the beginning of his illustrious career. He was in Paris on the Suzanne Lenglen Court for Federer's first Grand Slam match and has interviewed him exclusively more than any other journalist since he rose to prominence.

The Master: The Long Run and Beautiful Game of Roger Federer is Clarey's definitive biography of the Swiss tennis star who has won 20 Grand Slam titles. Clarey, who had unpredecented access to Federer and his team, focuses on the pivotal people, places, and moments in his rich and enduring career.

There is reporting from Federer's native Switzerland, South Africa, South America, the Middle East, and four Grand Slam tournaments. You will also find profiles of the other prominent players of this golden era of tennis, Rafael Nadal, Novak Djokovic, and Andy Murray.

The thing people notice about Federer is how he is one of the most handsome athletes on Earth, and how effortless he plays tennis, carving backhands, gliding to forehands, leaping for overheads, and who can forget when he hit that shot between his legs at the US Open.

Clarey reports that this wasn't always the case, as he at one time was a temperamental bleach-blond teenager with dubious style sense before his game matured and he became elegant. Since Federer is 40, some of these tales of his youth will likely be new and quite surprising to younger readers, like if they just learned that seven-time Super Bowl champion quarterback Tom Brady was drafted by the Patriots in the sixth round.

Federer's journey is like no others, if for nothing else, than that tennis players usually don't play this long. It has been rife with victories, dotted with a few crushing defeats, and one that has redefined excellence.

In this excerpt, Clarey writes of what a tournament experience is like for Federer: "TIGRE, Argentina. Midnigh approached and so did Roger Federer.

We journalists do a lot of waiting, and this wait was in a chauffeured car in a Buenos Aires suburb with Eric Carmen's plaintive ballad 'All by Myself' playing on the radio. That sounded right on key for me as I sat alone in the backseat with my notes and pre-interview thoughts, but not for Federer, who so seldom seems to be all by himself and certainly was not on this occasion.

It was mid-December 2012, the tail end of a resurgent year in which he had returned to No. 1 by winning Wimbledon, his first Grand Slam title in more than two years. Now, he had left his wife, Mirka, and three-year-old twin daughters at home in Switzerland and come for the first time to this part of South America to play a series of exhibitions that had sold out in minutes.

He was here for the money: $2 million per appearance, which guaranteed him more for six matches than the $8.5 million he had earned in official prize money in all of 2012. But Federer was also here for the memories: the chance to commune with new audiences in new places despite all the demands on his mind and body in the previous eleven months.

Other champions with their fortunes already secured would have been content to pass on the journey and the jet lag. But Federer and his agent, Tony Godsick, were thinking big picture: considering untapped Federer markets as well as untapped Federer emotions. The tour, which had taken him to Brazil and now Argentina, had surpassed their expectations, symbolized by the crowd of twenty thousand that had filled the makeshift stadium in Tigre this evening. That was a record for a tennis match in Argentina, proud land of tennis icons like Guillermo Vilas, Gabriela Sabatini, and Juan Martin del Potro, who had been Federer's opponent and to some degree Federer's foil.

'It was great but a little strange for Juan Martin,' said Franco Davin, then del Potro's coach. 'He's at home in Argentina, and they cheer more for Federer.'

So it has gone in many a tennis nation. Federer gets to play at home just about everywhere, and even near midnight several hundred Federer fans were still waiting outside the stadium: adults standing on boxes to get a better view, children perched on their parents' shoulders, digital camera lights flashing as their owners kept fingers on buttons in order to capture the moment. It was quiet and expectant, and then it was bedlam as Federer emerged from a side door and made his way to the backseat, moving lightly on his feet even after the three-setter against del Potro.

'How are things?' he said to me in the same tone after closing it behind him.

I have followed Federer on six continents; interviewed him more than twenty times over twenty years for the New York Times and the International Herald Tribune. Our meetings have taken place everywhere from a private plane to a backcourt at Wimbledon to Times Square to Alpine restaurants in Switzerland to a suite at the Hotel de Crillon in Paris with a ridiculously goof view of the Place de la Concorde while his future wife, Mirka Vavrinec, tried on designer clothes

One habit that separates Federer fro most other elite athletes I have encountered is that he will ask about you first and not in a perfunctory manner: inquiring baout your own jounrey to this particular place, your own perceptions of the tournament, the country, the people.

'The reason Roger is so interesting is because he's so interested,' Paul Annacone, his former coach, once told me...

Federer's curiosity - be it polite or from the heart - sets the tone for a conversation rather than a structured interview. It is disarming, although that does not seem to be his intent. What it creates, most of all, is an air of normalcy amid the extraordinary, and that is something Federer projects very intentionally. Federer can handle being on a pedestal (he has had lots of practice), but he often emphasizes that he is happier seeing eye-to-eye. His mother, Lynette, might well have passed this on. When someone hears her surname of a shopkeeper sees it on her credit card and asks if she is related to that Federer, she answers in the affirmative but then quickly shifts the focus y inquiring if they have children of their own.

'Look at this listen to this,' he said in his distinctive nasal baritone, gesturing out the car window. 'We're, like, snaking through the crowds with police escorts, and this not what I usually have, you know?'

'Thank God it doesn't, actually,' he said. 'I consider myself really like a regular guy with a fascinating life as a tennis player, because the life as a tennis player has become very much living it in the public eye, traveling the world, live audience. You get the review right away. You know if you are good or bad. It's like musicians a little bit, and I tell you, it's a good feeling to have. Even if you are bad, it doesn't matter. Go work at it. At least you know you have some work to do, and if you are great, it gives you confidence and motivation and inspires you. So it's a great life, I have to admit. It's hard at times, you know, because the travels can be hard. You know how it is. But I was thinking the other day, I entered the top 10 like ten years ago, and here I am now still experiencing things like this. It is like a total out-of-body experience, almost disbelief that it is really happening. I feel very fortunate, and I guess that's also one of the reasons I would like to play for longer, because these things are not going to come back around when you retire.'

The surprise, even to Federer, was just how much more would come his way before retirement.

That night, in Argentina, he was already thirty-one, the same age Pete Sampras, one of his role models, had been when he won a record fourteenth Grand Slam singles title at the 2002 United States Open. That turned out to be Sampras's final tour match and would have been one of the sport's ultimate walk-off home runs if Sampras had not waited another year to formally announce his retirement.

But Federer was not late in his career in Buenos Aires, as most tennis experts and fans would understandably have imagined. He was still smack in the middle of his run and would play on effectively into the 2020s as his generational tennis peers moved into business, commentary, or coaching Federer's younger rivals."