There have been a lot of headlines in the news lately about inflation, the United States debt limit, and the role government should play in the economy. Two books that will deepen your thinking on economics are Samuelson Friedman: The Battle Over the Free Market, by Nicholas Wapshott; and Three Days at Camp David: How a Secret Meeting in 1971 Transformed the Global Economy, by Jeffrey E. Garten. 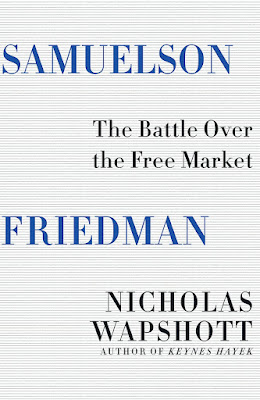 Samuelson Friedman: The Battle Over the Free Market

Nicholas Wapshott is known for his captivating biographies of Margaret Thatcher and Carol Reed, as well as The Sphinx: Franklin Roosevelt, the Isolationists, and the Road to World War II; and Keynes Hayek: The Clash That Defined Modern Economics.

In the new book, Samuelson Friedman, Wapshott brings narrative verve to a modern ecomonics debate told in the same vein as Keynes Hayek, in that it was another duel on economics, only in modern times.

In 1966, Newsweek hired two columnists - Paul Samuelson and Milton Friedman - to debate the world of business and economics. Samuelson was a towering figure in Keynesian economics, which supported the management of the economy in the way prescribed by John Maynard Keynes's General Theory. Friedman, who was known mostly in conservative academic circles, championed the theory of "monetarism" and insisted the Federal Reserve maintain tight control over the amount of money circulating in the economy.

Samuelson was a forbidding technical genius who grew up a child of relative privilege and went on to revolutionize macroeconomics. He authored the best-selling economics textbook of all time, remarking, "I don't care who writes a nation's laws - or crafts its advanced treatises - if I can write its economics textbooks."

Friedman studied the Great Depression and, with Anna Schwartz, wrote the seminal books The Great Contraction and A Monetary History of the United States. Following the lead of Friedrich Hayek, Friedman found fortune writing a treatise, Capitalism and Freedom, that combined free markets and libertarian politics in a potent argument that remains a lodestar for economic conservatives today.

Samuelson and Friedman's argument centered on how, or whether, to manage the economy amidst one of the longest periods of economic turmoil in the United States. As the soaring economy of the 1950s evolved into decades overtaken by declining prosperity and "stagflation," making it a time when the theory and practice of economics became the preoccupation of politicians and the focus of national debate.

Wapshott writes of how they approached their weekly columns in this excerpt: "The ability to maintain a steady and novel stream of subjects to engage readers is a regular columnists's principal concern. At first, Samuelson and Friedman both thought writing a weekly column in Newsweek would mean that the fountain of ideas would before long run dry. But both men soon adapted to the rhythm, at first writing every three weeks, then, when Henry Wallich joined the Federal Reserve board, every other week. As the pace quickened, both discovered that the task became easier and that their rapport with readers improved.

'When first deciding to write for Newsweek, I wondered whether I might run out of topics to comment on. I need not have worried,' explained Samuelson. His lingering concerns about being inspired in time for the fortnightly deadlines was cured by the act of writing itself. The columns became a means of thinking aloud. 'How do I know what I really think until I read what my pen is writing?' Samuelson asked. And both men wrote quickly and cogently. As Samuelson put it, 'Having a facile pen helped.'

The fact that the two men who had known each other so long were pitted against each other proved a point of amusement to them both, and something of an inspiration, too. As both were intensely competitive and highly articulate, the contest for readers' attention - and approval - produced good copy.

Both men were aware that a great deal more was at stake in the columns than merely measuring events against their current views. Keynes may have triumphed over Hayek and classical economists after publication of The General Theory, but by the time Samuelson and Friedman locked horns thirty years later, the Keynesian hegemony was under pressure. 'The layman has a vision of economists as a quarrelsome tribe who never agree.' wrote Friedman...

Samuelson, like Keynes, had an elegant pen, and the care and pleasure with which he chose his words is evident. Like Keynes, he could draw upon a deep hinterland of knowledge way beyond the dry stuff of economics. Like Ronald Reagan, who began his weekly radio broadcasts with a joke, Samuelson liked to start his columns with a humorous quote, then, having raised a smile, he moved to the substance of his mini-essay.

So when, for example, in 1966, commenting on whether the Federal government was applying the right fiscal remedies, Samuelson found himself hovering between two minds, he wrote that 'like Oscar Wilde, who spent the morning putting in a comma and the afternoon taking it out, I am oscillating.'

He could mix it up with intellectual giants. And he credited readers with having as broad and deep an intellectual hinterland as he did...

Friedman approached writing in a different way. Not only did his columns display little cultural erudition, but, in comparison to Samuelson's broad brush and often lofty approach to problems, Friedman liked to engage with the reader directly and make his case in practical terms. He was less interested in elegance and verbal fireworks than in expressing himself with clarity and persuasiveness...While Samuelson may be thought of as a Keynesian high priest with highfalutin phrasing to match, Friedman was a door-to-door free-market evangelist, hoping to convert the unwashed one proselyte at a time." 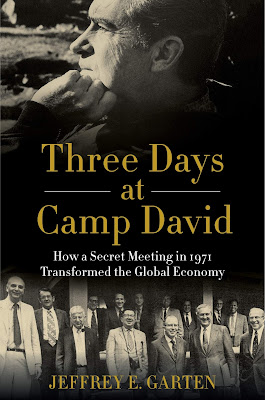 Three Days at Camp David: How a Secret Meeting in 1971 Transformed the Global Economy

Jeffrey E. Garten is a dean emeritus at the Yale School of Management, former undersecretary of commerce in the Clinton administration and former managing director of the Blackstone Group.

In Three Days at Camp David, Garten focuses on the secret meeting held at the presidential retreat over the weekend of August 13-15, 1971, when President Richard Nixon and his senior advisors made the decision to sever the link between the dollar and gold, which had existed since 1944. Participants included Treasury Secretary John Connally, Federal Reserve Chairman Arthur Burns, Chairman of the Council of Economic Advisers Paul McCracken, Director of the Office of Management and Budget George Shultz, and White House Chief of Staff H.R. Haldeman.

This was a monumental act, possibly the most consequential economic event since World War II until today, and it sent the global economy into a tailspin and sent shock waves throughout America's most important alliances at the height of the Cold War.

It reconfigured the global monetary system and the geopolitical framework on which it rested, as well as putting global, economic, and political relationships on a firmer footing.

Garten highlights the many parallels between the early 1970s and today, which include the ambivalence about globalization; the rising forces of nationalism and protectionism; the tensions between the costs of international leadership and the need to invest in infrastructure and people at home; the complexities of dealing with allies in an interdependent world; and the search for a global financial system that can avoid destructive crises.

Three Days at Camp David includes interviews with the participants at that big meeting and other financial and foreign policy experts, an examination of diaries and handwritten notes of several attendees, plus research in the archives of two presidential libraries and the New York Federal Reserve Bank. He also illuminates the tense negotiations over trade and finance in London, Paris, and Rome that followed the Camp David weekend.

Garten writes, "This book tells the full story of that weekend - what led up to it, what transpired over those three days, what happened afterward, and what it all meant. It is, above all, an account of how the United States began to rethink its role in the world, how it realized it could no longer shoulder all the burdens that were thrust on it after World War II, and how it attempted to redistribute part of its awesome responsibilities to its allies. The events I have written about also illustrate a major inflection point in American history: a moment when the United States, its enormous power notwithstanding, was forced to recognize its growing interdependence with other countries and the need to move from using its raw unilateral leverage to engaging in more multilateral diplomacy and cooperation.

"I have not told this story through the lens of the U.S. dollar and its relationship to gold. The issues surrounding the American currency may sound esoteric, but in fact the dollar was, and still is, at the intersection of foreign policy, national security, and international commerce. Our currency is also a major influence on what we care so passionately about at home, including such issues as jobs, prices, retirement security, financial stability, economic opportunity, and even respect in the world. We may not think about the dollar in such all-encompassing terms, but the value of the greenback had had a broad and deep impact on the country and the world as well as on our everyday lives."